Former NASCAR Camping World Truck Series champion Mike Skinner is saying little about published reports that he has been released by Randy Moss Motorsports with a year remaining on his contract. Skinner told Sirius NASCAR Radio’s Sirius Speedway with Dave Moody only that, “I still have a contract with Randy Moss Motorsports through 2011.” He declined to comment further, citing ongoing negotiations between himself and the team. 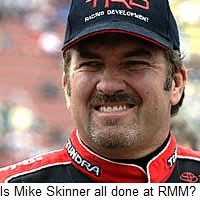 The 2010 season was disappointing one for Skinner, with an eighth-place finish in points and only two Top-5 finishes in 25 starts. His best finishes were a pair of fourth-place showings at Texas and Bristol Motor Speedways.

The 1995 Truck Series champion moved to RMM after Bill Davis Racing closed its doors on Christmas Day 2008. In 2009 -- his first season with RMM -- he finished third in the championship standings with a trio of wins. Skinner was unable to maintain that level of performance last season, however, after crewchief Eric Phillips left the team for a new position with Kyle Busch Motorsports. Veteran Gene Nead began 2010 as crewchief for the #5 Navistar/International/Monaco RV Toyota, but was replaced by lead engineer Stacy Johnson after the seventh race of the season at Charlotte Motor Speedway.

While clearly unhappy with his 2010 performance, Skinner attempted to put a positive spin on things late last season, refusing to place blame on any individual. "We can bad-mouth people and make excuses and do a lot of things, but that just creates more negativity,” he said. He said he urged RMM co-owner David Dollar to hire a more experienced leader for the team, however, saying, “I am jumping up and down and working with David… to hire some leadership. When Eric Phillips walked out of the building, we didn't realize what a huge loss it was."

While Skinner remains silent, sources within Randy Moss Motorsports say he is unlikely to drive for the team again in 2011. Multiple sources say the team is negotiating with former series champion Travis Kvapil about replacing Skinner, with an official announcement expected once the details of Skinner’s exit are finalized. Kvapil drove for Front Row Motorsports in the NASCAR Sprint Cup Series in 2010, finishing 35th in points.
Posted by Dave Moody at 4:24 PM