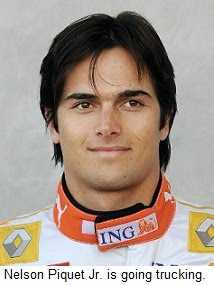 Piquet made five Truck Series starts for Red Horse Racing last season, with three Top-10 finishes. The highlight of his year came at Daytona International Speedway in February, where he finished sixth. He will compete this season in a new, third entry out of the KHI stable as a teammate to former series champion Ron Hornaday, Jr. in the #33 Chevrolet. The team’s #2 Chevy will be shared by Harvick, Elliott Sadler and others next season.

Piquet told Sirius NASCAR Radio’s Sirius Speedway with Dave Moody that sponsorship is in place to finance the ride. “We have sponsors signed at the moment, and they will be announced all together at a later date,” said Piquet. “We want to close all the deals and announce them before Daytona. We’re handling the contracts and all the legal things, and we’ll have an announcement very soon.”

He said he believes he will have the personnel and resources behind him to contend for race wins, the Raybestos Rookie of the Year title and potentially even the series championship. “I had good people behind me in my five Truck starts last season, and they allowed me to have success. I will have good people behind me again at KHI, and I can’t wait to get to the shop and see everything for the first time.”

Piquet is the son of three-time Formula One World Driving Champion Nelson Piquet, and drove a Renault F1 entry in 2008 and part of 2009, before being released.
Posted by Dave Moody at 1:55 PM