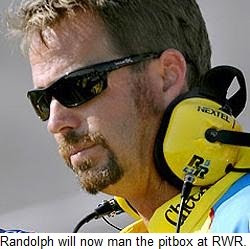 "I'm really looking forward to working with Steve Wallace and the 5-Hour Energy team," said Randolph. "Steve's definitely been one of the most improved drivers over the last couple of years and has really developed into one of the best Nationwide Series guys out there. This team has a lot of potential, (and) I'm looking forward to continuing to build this program and hopefully being one of the contenders for the Nationwide Series Championship in 2011."

RWR General Manager Larry Carter said of Randolph's hiring, "We're very excited to add Doug to our organization. I've known Doug for a while and he's a really talented guy. He brings a lot of valuable experience to our team, including a lot of experience with the Car of Tomorrow. We're all looking forward to working with him."
Posted by Dave Moody at 6:04 PM