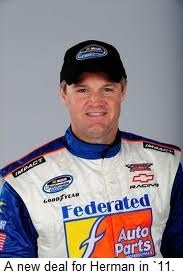 Kenny Wallace has signed a new deal to run the full 2011 NASCAR Nationwide Series schedule for RAB Racing with Brack Maggard. Wallace will make his debut in RAB’s #09 Toyota Camry on Saturday, February 19, 2011, in the season-opening DRIVE4COPD 300 at Daytona International Speedway. The St. Louis, Missouri, native has made more than 800 career starts in NASCAR’s top-three divisions, including 488 Nationwide Series races with nine wins, 10 poles, 63 top-five and 159 top-10 finishes. He has also been voted NASCAR Nationwide Series Most Popular Driver three times, in 1991, 1994 and 2006.

“I’ve been nervous since the final 2010 Nationwide Series race at Homestead, trying to find the right fit for next year,” said Wallace. “Now I can finally sleep at night. My goal was to find a team with whom I could be competitive and I believe I have found that with RAB Racing. I have known Robby (Benton) and watched him grow his team for the past few years. Their relationship with Toyota Racing Development (TRD) is huge and will allow me to work with at least three other Toyota teams -- including my brother Rusty’s -- and gain valuable information that will help us with the Nationwide program at RAB Racing next year.”

Co-owner Robby Benton shared Wallace’s enthusiasm, saying, “Having our plans in place before the Christmas holiday is great for team morale and will provide us with ample time to prepare… for the upcoming season. We’ve made significant changes at RAB Racing over the last few months in an effort to elevate our program. Our alliance with Toyota, the relationship we have with TRD and now adding Kenny to the mix will bring depth to our program. It also helps tremendously having a driver with Kenny’s notoriety. People love him and hopefully we’ll be able to reinvigorate his fan base.”

The team currently has 16 races sponsored, with the University of Northwestern Ohio (UNOH) serving as primary sponsor at Daytona in February. Additional sponsors will include Federated Auto Parts and Family Farmers, a coalition of corn and soybean farmers. Benton said sponsorship opportunities are still available for the remaining 18 events, adding, “We have a lot going on within our marketing department right now, and I feel pretty confident about having all 34 races sold before Daytona.”
Posted by Dave Moody at 2:28 PM