AT LAST! A Grand Marshal For The Ages! 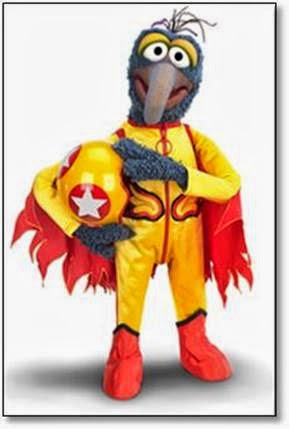 Already a daredevil in his own right, the Great Gonzo will spend Sunday, March 23 among his peers in NASCAR, just two days after his new movie, “Muppets Most Wanted,” hits the big screen.
The poultry-loving daredevil and plumbing aficionado will give the command “Drivers, Start Your Engines” to NASCAR’s own field of 43 daredevils as Grand Marshal for the Auto Club 400 at Auto Club Speedway.  The race will be televised live on FOX at Noon (PT).

“Going around in circles as fast as possible is how I got my start,” said Gonzo, who counts NASCAR racing among his favorite sports. “So it’s a real honor to be named Grand Marshal of this year’s Auto Club 400! For me, it’s right up there with sword-juggling, bog-snorkeling and competitive dentistry.”

Gonzo stars in the upcoming Disney movie “Muppets Most Wanted," which takes the entire Muppets gang on a global tour, selling out grand theaters in some of Europe’s most exciting destinations, including Berlin, Madrid, Dublin and London. But mayhem follows the Muppets overseas, as they find themselves unwittingly entangled in an international crime caper headed by Constantine—the World’s Number One Criminal and a dead ringer for Kermit the Frog—and his dastardly sidekick Dominic, aka Number Two, portrayed by Ricky Gervais. The film stars Ty Burrell as Interpol agent Jean Pierre Napoleon and Tina Fey as Nadya, a feisty prison guard.