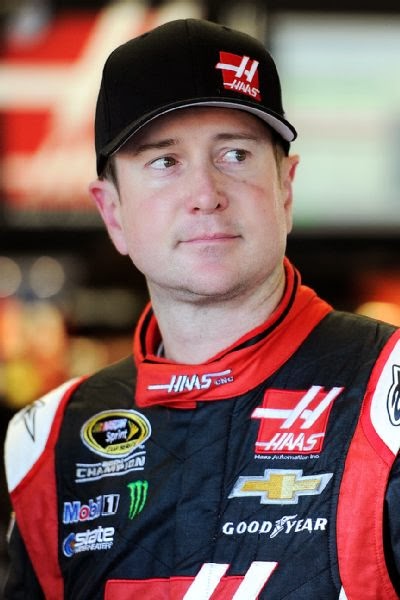 Kurt Busch returns to his hometown for Sunday’s Kobalt 400 Sprint Cup Series race at Las Vegas Motor Speedway, returning to a place where, almost a decade and a half ago, he took a leave of absence from working the graveyard shift at the Las Vegas Valley Water District to pursue his NASCAR dream.
After graduating in 1996 from Durango High School in Spring Valley, Nev., Busch left his home state to pursue a pharmacy degree at the University of Arizona. After a year where schoolwork took a back seat – quite literally – to racing, Busch grew tired of doing homework in the back seat of the transporter and returned to Vegas to work for the Water District.
There was a method to his madness.
When Busch was approximately nine years old, his father asked him, “What do you need to survive in this world?”
Kurt responded, “Money,” and his father encouraged him to think of a public utility that people cannot live without. That conversation eventually led him to pursue a career at the water district, where Busch eventually scored a full-time spot on the graveyard shift in 1998.
“We were pretty much the construction and fixer-upper group,” he recalls. “We replaced service lines, fire hydrants and handled water main breaks. I applied for the job to try and get some steady income rolling, but all along, it was about racing. Racing, racing, racing… that’s where I wanted to be.”
While the schedule did little for his social life, it turned out to be a blessing in disguise, allowing Busch to go racing on the weekends.
“We would work four ‘10s,’ (10-hour days),” recalls Busch. “I’d go to work at 8 p.m. and get off at 6 a.m. When I got off on Friday, I didn’t have to be back at work until 8 p.m. Monday. That gave me all weekend to play with race cars. Then on Monday, I would sleep all day (before getting) up to go to work.”
By 2000, Busch’s success at the wheel of a race car had earned him a driving contract with Roush Racing in the NASCAR Camping World Truck Series. He took a 12-month leave of absence from the Water District to pursue his racing dream, and 11 months later, picked up the phone and informed his boss that he would not be returning to the Graveyard Shift, instead accepting a full-time Sprint Cup Series ride for the following year.

As a token of appreciation to his former Water District co-workers, Busch returned the following year as a full-blown NASCAR star, throwing a pizza party for the boys on the night shift.
“I came back in March and bought pizza for everyone, as a thank you for holding my spot,” he said. “I was the new guy… helping do the grunt work, but there were a lot of life lessons that I learned from those guys.”
Now, 15 years later, the Las Vegas native is set to make his 473rd career Sprint Cup Series start, this time driving the No. 41 Haas Automation Chevrolet for Stewart Haas Racing. And who knows, maybe he’ll bump into one of his old cronies from the water crew.
“In Phoenix last week, I ran into a guy named Vern; one of my crew leaders (who) has since retired,” said Busch. “Here he is in my autograph line at the souvenir trailer and he said, ‘Hey Kurt, remember me? I’m Vern.’

"That group of guys isn’t there anymore and I’m sure it wouldn’t be the same, but when I was nine years old and Dad asked me, ‘What do you need to live in life,’ it’s funny that was the direction he was trying to push me.”
Posted by Dave Moody at 4:57 PM