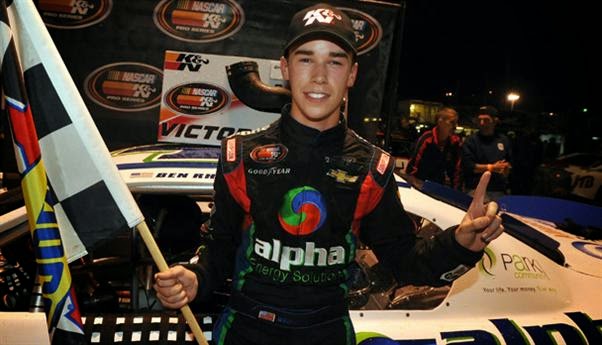 A native of Louisville, Kentucky, Rhodes won the K&N Pro Series East championship as a rookie.  With the title he also claimed Sunoco Rookie of the Year honors and the series’ most popular driver award.  His mammoth 2014 included five wins, 11 Top-5 and 13 Top-10 finishes.  Rhodes also competed four times in the NASCAR Camping World Truck Series, earning one Top-5 and three Top-10 finishes.

“Ben is one of the rising talents in NASCAR,” said JR Motorsports general manager Kelley Earnhardt Miller.  “As a company, JRM takes pride in cultivating young drivers, and together with Alpha Energy Solutions, we’re thrilled to give Ben a platform to further develop his skills at the next level.  I’m excited to see what this coming year will bring for him and the 88 team.”

“I'm thrilled to be joining one of the top teams in NASCAR for the 2015 season,” Rhodes said.  “It's been my goal to compete in NASCAR’s top tiers, and this is a tremendous opportunity with JR Motorsports and Alpha Energy Solutions to race in the XFINITY Series.  I couldn’t think of a better group of people to surround myself with to continue my growth in the sport.  I am looking forward to working with crew chief Dave Elenz, driving the No. 88 Chevrolet with Dale Jr., Kevin Harvick and Kasey Kahne, as well as sharing the track with my teammates Chase Elliott and Regan Smith.”

The No. 88 team is the only JR Motorsports team in which multiple drivers will pilot the car throughout the season.  It was announced Tuesday that former Hendrick Motorsports engineer Dave Elenz will serve as the team’s crew chief.
Posted by Dave Moody at 11:15 AM