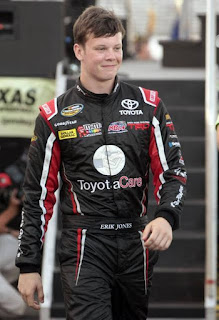 Erik Jones will do double duty next season, competing in a full schedule of NASCAR XFINITY Series competition, in addition to a limited slate of Sprint Cup Series events.

Speaking on SiriusXM NASCAR Radio’s The Morning Drive today, team owner Joe Gibbs said the 19-year old phenom will play a major role in the future of his race team.

"We look at Erik as a big part of our future, and we've got a plan laid out,” said Gibbs. “It's not something we've talked about in public, but we all kind of know inside of our racing organization, (along with) with his parents and his agent. We've talked over a plan, and basically the plan next year would be a full XFINITY  season -- to try and run for a championship there -- and also, in all likelihood, to have him in some Cup races.

“That would be the goal for next year."

Jones has turned a few laps in the Sprint Cup ranks this season, subbing for Denny Hamlin at Bristol Motor Speedway when Hamlin suffered neck spasms during a lengthy rain delay. He also replaced the injured Kyle Busch at Kansas Speedway in May. While Joe Gibbs Racing currently fields the maximum allowable four cars in Sprint Cup competition, NASCAR rules allow a fifth entry in limited events for a projected 2017 rookie contender. Hendrick Motorsports has utilized a similar plan this season for driver Chase Elliott.

Gibbs declined to discuss his long-term plan for Jones, saying, "We've got a plan laid out, and it's something we don't want to talk about now. But there is no question, Erik's headed for Cup. He's headed for Cup and we've got a path charted that we think is the best to get him ready and to fulfill his goal of being in a Cup car as quick as we can get him there."
Posted by Dave Moody at 4:01 PM