As part of the Hickory race, Bellerose will debut a new associate sponsor, Camping World of Statesville, NC, joining Rockingham Speedway and Fast Track High Performance Driving School on the quarter panels of the GMS Chevrolet. The car has been largely rebuilt since a hard practice crash at Caraway Speedway two weeks ago


“The guys worked incredibly hard to get this car back together,” said Bellerose. “We had major frame damage that had to be repaired and a ton of suspension parts to replace, along with half the body. The impact even broke one of the cylinder heads. This team deserves a good finish Saturday night, and I’m going to do my best to see that they get one.” 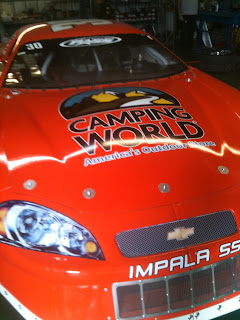 Bellerose expressed happiness with the addition of Camping World to the team’s roster of sponsors, saying, “The Goods; General Manager Alan and Sales Manager Brian, know racing and race fans. We couldn’t be happier to have them as part of our team this weekend, and I hope we can bring them home a trophy.”
Practice begins Saturday at 2 pm, with qualifying set for 4:30. Feature events for the PASS Super Late Model, CCS Limited Super Late Model, Bandolero, Legends and Allison Legacy divisions begin at 6 pm.