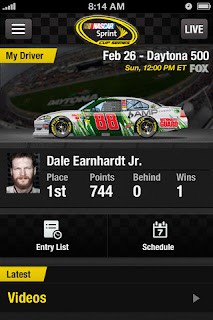 As the NASCAR’s postseason gets set to begin, NASCAR, Sprint and Turner Sports have announced the launch of the sport’s first official app for iPhone and iPod Touch. The NASCAR Sprint Cup Mobile App allows fans to follow their favorite drivers and stay on top of Chase for the NASCAR Sprint Cup race action, including access to race day content, schedules, standings, breaking news and more.


iPhone customers with a Sprint Unlimited Data Plan will have access to extra features, including:


“Fan engagement during the Chase for the NASCAR Sprint Cup is significantly elevated each and every season as the championship battle unfolds and ultimately culminates at Homestead-Miami Speedway in November,” said Marc Jenkins, NASCAR vice president of digital media. “With NASCAR Sprint Cup Mobile now available for the iPhone for the first time ever, fans will get a customized experience, bringing them closer to the racing action than ever before.”


“NASCAR Sprint Cup Mobile is an absolute must-have app for any NASCAR fan,” said Tim Considine, director Sports and Entertainment Marketing, Sprint. “The application puts you right in the middle of the action as it turns your iPhone or iPod Touch into a race scanner each weekend. It’s the perfect time for fans to download it as the Chase for the NASCAR Sprint Cup is about to begin.”


“Turner Sports has more than a decade of experience with the NASCAR fan, and we’ve applied it all in this new NASCAR Sprint Cup Mobile App,” said Justin Williams, Turner Sports senior director of business operations for NASCAR.COM. “The collaboration with our partners at Sprint and NASCAR has produced a great experience for iPhone and iPod Touch users.”


NASCAR’s digital rights including NASCAR.COM, the official online destination of NASCAR which provides racing enthusiasts with an all-inclusive offering of engaging content including fantasy games, video highlights, social elements and in-depth editorial content, are currently managed by Turner Sports. As part of a restructured partnership announced earlier this year, Turner Sports remains the exclusive sales agent across the NASCAR Digital Media platform through 2016 while NASCAR assumes operational control on Jan. 1, 2013 of its interactive, digital and social media rights and all related platforms.


The NASCAR Sprint Cup Mobile App is available for free from the App Store on iPhone and iPod Touch or at www.itunes.com/appstore.
Posted by Dave Moody at 3:29 PM