Vickers Back For MWR This Weekend 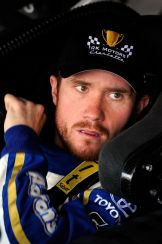 Brian Vickers' part-time job at Michael Waltrip Racing continues this weekend at New Hampshire Motor Speedway, with the seventh of eight scheduled appearances for Vickers in MWR’s No. 55 Toyota.


The car boasts new sponsorship this time around, with Freightliner and Jet Edge gracing the quarter panels of the No. 55 machine. Vickers hopes to continue the solid results that have highlighted his starts with MWR this season. He has earned Top-five finishes in three of his six starts; including a fifth-place showing at Bristol in March and fourth-place finishes at both Sonoma and Bristol last month. Vickers’ final Sprint Cup race will come at Martinsville on Oct. 28.

Michael Waltrip Racing is carrying the Jet Edge sponsorship this weekend as a salute to sponsors Jet Edge and Freightliner. MWR uses a 90,000 psi Jet Edge waterjet system to cut more than 1,000 parts for each of the 56 race cars it builds per year.
Posted by Dave Moody at 4:10 PM