Tracy and Tagliani Throw Down While NBC Cowers 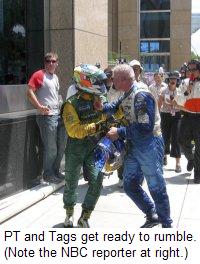 Paul Tracy’s crash with Alex Tagliani in the San Jose Grand Prix was the first of two confrontations between the two Sunday. After emerging from his wrecked racecar, Tagliani marched down pit road and confronted Tracy, shoving him in the chest and peppering him with expletives. Tracy walked away, only to have Tagliani pursue him and grab his firesuit. Tracy reacted with a looping left jab, and the Canadian drivers scuffled for more than a minute before track and team officials were able to pull them apart.

Tracy used poor judgment on two different occasions Sunday. First, he elected to steer directly onto the racing surface after "blowing" a corner on lap 53; directly into the path of Tagliani. And second, he elected to throw a punch at Tagliani's fully-helmeted noggin. Apparently, Tags is a graduate of the Jeff Gordon Martial Arts Academy, and his decision to trigger a melee in full protective gear left Tracy with both a cut face and a badly swollen hand.

You can't fault Tagliani for being upset. After all, he and teammate Will Power have scrapped five racecars in the last three races, and the inventory of replacement parts is getting pretty low. You also can't blame P.T. for giving Tagliani the old stiff-arm, after Tags jumped up in his face for the third or fourth time.

What you can criticize is NBC's inexplicable decision not to cover the fight. Their cameras followed Tagliani from his wrecked racecar all the way to pit road, a walk that took more than a minute to complete. But the minute the punches began to fly, the boys in the truck cut away to an all-important yellow-flag pitstop by Sebastien Bourdais.

The Tagliani/Tracy dustup would have been captivating TV, had the nationwide audience been allowed to see it. Instead, the Peacock Network decided to play it politically correct and cut-away from the fight, sparing us the yet another up-close-and-personal look at man's inhumanity to man.

Not everyone was so timid. ESPN -- which wouldn't know a Champ Car race from a load of laundry most weeks -- played footage of the fight at the start of Sunday night's SportsCenter broadcast. Dave Despain's Wind Tunnel gave it full play Sunday evening, as did SPEED News and virtually every other national, regional and local sports anchor.

And yet, inexplicably, NBC chose to censor its footage of the fight, pretending that all was well in the Champ Car garage, while fans in attendance hooted and cheered replays of the incident on the track's Jumbotron screens.

And we wonder why Champ Car's TV ratings hover slightly south of "Bowling For Dollars?"

For those with no other options than NBC, you can view complete footage of the crash and fight here. You can also see NBC's sanitized version here.