From his humble roots in rural Wilkes County, North Carolina, Johnson stepped from behind a plowing mule one day to take the wheel of a stock car, beginning a career that saw him become of the greatest drivers and owners in the history of the sport. By the time he retired from driving at the age of 34, he owned 50 NASCAR Grand National victories; including the 1960 Daytona 500.

As an owner, he collected more than a hundred more victories with legendary drivers like Fred Lorenzen, Curtis Turner, Lee Roy Yarbrough, Bobby Allison, Cale Yarborough, Darrell Waltrip, Neil Bonnett, Terry Labonte, Bill Elliott and Geoff Bodine. He won three consecutive NASCAR Winston Cup championships with Cale Yarborough in 1976, `77 and `78, and three more with Waltrip in 1981, `82 and `85. A seat in one of his cars was regarded as the ultimate assignment in NASCAR, and by the time he left the sport in 1995, his record as a car owner was second only to that of the legendary Petty Enterprises. 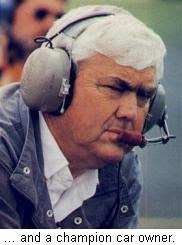 His amazing life -- from farm boy to moonshine runner to NASCAR champion – was immortalized in print and on the silver screen, and Johnson will sit for a rare, long-form conversation about his life and career Friday at 5 p.m. ET.

"We're thrilled that Junior has agreed to join us," said Moody. "He makes very few appearances at the track these days, and grants even fewer interviews. He has said that he considers racing a closed chapter in his life, and we are honored that he has agreed to re-open that chapter for us."