Last week, I had an opportunity to revisit a lost portion of my youth, traveling to West Springfield, Massachusetts, to attend Dr. Dick Berggren’s Speedway Expo show.

During my time there, I was able to touch base with people I hadn’t talked to in decades; many of them among the most observant and innovative minds in American motorsports. Sadly, the consensus of opinion among all those terribly smart people was twofold. Short track racing is in serious trouble, and most of that trouble is self-inflicted. 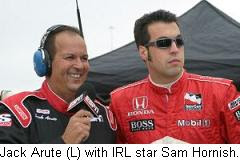 Jack Arute – whose family operates the legendary Stafford Motor Speedway in Connecticut – hit the nail right on the head when he said, “Racers today are lazy. They buy every part on their car, instead of building it themselves, and they’re not interested in helping the promoter grow the sport. They want to show up, race and go home. They think promoting the sport is the track’s job.”

Jack was right, and they’re wrong.

When I was a kid, the highlight of my night at the races came when they threw open the pit gate after the final checkered flag and let the fans in. I stood in line to get an autograph from Bobby and Beaver Dragon, “Dynamite” Dave Dion and Jean-Paul Cabana, listening intently as they re-ran that night’s race, and looked forward to next week’s big, 200-lap midseason championship special. I stood in line every week for the same autographs -- over and over again -- and I was thrilled to do it.

Today, most of the racers are gone by the time the pit gates open. A few of the smart ones stay behind, helping to promote their sponsors, the track, and the sport as a whole, but the vast majority are far more interested in getting home, unloading the car and getting to bed than they are in spending time with the fans.

Promoters shoulder their share of the blame, as well. They start their shows a half-hour late for no apparent reason, other than their complete and total inability to get organized.

They run sloppy, inefficient programs, wasting time between events in the misguided belief that fans will use the downtime to buy one of their lousy hotdogs.

They run seven seemingly identical divisions, despite the fact that each class has only nine cars. Why? Because if they don’t, some of their racers might defect to the track up the road. 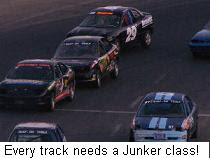 They run time-trials instead of heat races, start the fast car on the pole, and wonder why fans have stopped turning out to witness an evening of flag-to-flag victories. And at the end of the night, they blame their dwindling fan and car counts on NASCAR’s insistence on running Nextel Cup races on Saturday nights.

Mr. Promoter, if you want people in your grandstands, there are ways to make it happen. Tighten up your program, start on time no matter what, and ensure that people are on their way home at a reasonable hour. Friday and Saturday night programs should be over by 11 p.m., every other night by 10. If you see people walking out before your main event begins, rest assured that they won’t be back. It’s your fault. Your show is too long.

Trim your classes down to three; an entry-level junkyard class, an affordable semi-pro division, and a “thunder and lightning” headliner. The top class should dazzle the fans with speed and skill. The middle class should be rough-and-tumble with a good car count. The junkers? They’re comic relief. If they average less than a spin every five laps, it’s time to de-tune `em a notch or two.

Mandate inexpensive crate engines for your top two divisions. Ban tire softener and high-dollar shock absorbers, and pay a competent tech man whatever it costs to keep everyone on the straight and narrow. Turn a deaf ear to those racers who want to spend the competition into submission. The cheaper it is to compete, the more people will want to, and higher car counts are a good thing.

Ditch those dull-as-dishwater time trials, and handicap your main events. A winner’s only a winner if he has to pass someone along the way; preferably someone on the lead lap. If a guy wins more than three races as year, you’re doing it wrong.

And finally, cut your ticket prices. Let Dad, Mom and two kids come to the track for the same price as two adults. Pick a night to let Scouts and Little Leaguers in free when accompanied by an adult. Offer civic and school groups a discount on blocks of tickets, and make sure your racers know how important it is for them to stay after the races and talk to the people who came out to watch them.

Do all these things for one year, and see if things don’t improve. I wish you luck.
Posted by Dave Moody at 11:19 AM