NASCAR’s new Car Of Tomorrow completed its maiden voyage with flying colors Sunday at Bristol Motor Speedway. There was plenty of passing – most all to the inside, like always at Bristol -- frequent bump-and-run moves, a multi-car pileup or two to add spice to the soup, and a few frayed tempers along the way. In fact, had it not been for those much-discussed rear spoilers and front splitters, Sunday’s “Food City 500” looked alot like every other race we’ve seen at Thunder Valley in recent years. 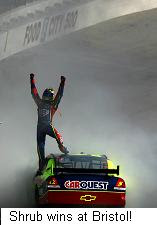 It was certainly not the cataclysmic event many had predicted. Front splitters did not shatter into clouds of shrapnel at every incidence of minor contact. Spinning cars were not tossed airborne by the inverted force of the new rear wings. The cars seemed quite driveable -- with a number of drivers coming from deep in the pack to record Top-10 finishes – and were clearly responsive to chassis adjustments.

Aside from a three-wide sprint to the checkered flag (something that is wholly impossible at Bristol), it’s hard to imagine how the bosses in Daytona Beach could be any happier with the COT’s debut.

Biffle Too Low: Roush-Fenway Racing is in line for a possible penalty, after Greg Biffle's #16 Ford failed a post-race inspection at Bristol Motor Speedway. NASCAR Vice President for Competition Robin Pemberton said the car was too low following its fifth-place finish, but would not speculate on possible penalties. The car has been taken to NASCAR’s R&D Center in Concord, N.C., for examination, but will be returned to the team in time for them to take it to Martinsville Speedway this weekend as a backup. Kyle Busch’s winning Chevrolet was also taken to the Charlotte R&D Center, and will reportedly be scanned once again to determine what changes took place in the chassis as a result of 500 hard miles at Thunder Valley.

D.J. Unhappy As Rough Start Continues: Dale Jarrett qualified for the Food City 500 without benefit of a Past Champion's Provisional for the first time this season, but that’s where his good luck ended. Early in Sunday’s race, Jarrett’s UPS Toyota got turned around on the front bumper of Matt Kenseth’s Ford, sending Jarrett spinning into the Turn One wall, then into the path of both Robby Gordon and David Gilliland.

Jarrett emerged from his battered Camry and glared at Kenseth with arms spread wide and palms up; the universal sign for “WTF was that?” He was credited with 42nd place at the end of the day, and unofficially dropped out of the Top-35 in owner’s points heading for Martinsville this weekend.

Another “What If” For Stewart: Tony Stewart had the dominant car of the day, only to have engine problems drop him many laps down at the finish. After starting fourth, the two-time Nextel Cup champion needed just seven circuits to take the lead from polsitter Jeff Gordon, and was the class of the field until pitting under caution on lap 291, complaining of no fuel pressure.

Repairs were made, but after leading 257 of the first 291 laps, Stewart spent the rest of the day saving the car for Martinsville, en route to a 35th place finish.

Roush-Fenway Must Downsize: NASCAR has informed Roush Fenway Racing that it will have to decrease the number of Nextel Cup teams under its ownership umbrella from five to four, by the start of the 2010 season. Initially, NASCAR said Roush-Fenway could wait until the end of a driver and sponsor contract cycle to downsize, but uncertainties over possible contract extensions prompted the sanctioning body to implement a hard date of February, 2004 at Daytona.

Team President Geoff Smith confirmed this weekend that Ameriquest Mortgage – major sponsor of Greg Biffle's #16 -- has asked the team to sell off the final two years of its contract, after financial difficulties led to the announcement of a second round of employee layoffs recently. Smith said, “It's very clear that they want to reduce their contract exposure. We’ve got this lame duck environment going on, which is not helpful to anybody.”

Smith said he does not anticipate problems finding a sponsor to replace Ameriquest in 2008 and 2009, and after that, he said Roush-Fenway hopes to sell one of its teams to meet NASCAR’s ownership cap. "There's no mistaking what we have to do," Smith said. "Regardless of what goes on within our programs, we have to go to four cars in 2010. We've got three more years to sell one of our teams off, and hopefully, we can retain some business with that sale."

Respect At The Front: For the second time in the last three weeks, Kyle Busch and Jeff Burton epitomized NASCAR Nextel Cup racing at its best Sunday. 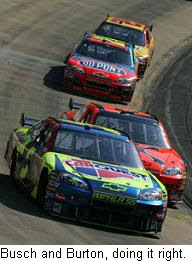 Both men conserved their cars for when it mattered most, then lit the afterburners in the final 50 laps en route to the front. Busch took the lead from Denny Hamlin when Hamlin slowed to avoid the limping-to-pit-road car of Jimmie Johnson, then held off a clearly faster Burton on a final, green-white-checkered restart to claim his fourth career Nextel Cup Series win.

Burton had at least three chances to inflict the now-customary “bump and run” on Busch in the final two laps, but never did, coming up about four feet short at the checkered flag. “Kyle has always raced me clean, and I tried to return that,” said Burton, who came out on the long end of an almost identical finish two weeks ago in the Las Vegas Busch race. Busch, meanwhile, ackowledged Burton’s last-lap largesse, saying, “Jeff could have dumped me in turns three and four, but I had some brownie points to use up from our Vegas finish. It was a great battle.”

Just when it seems like every driver graduated from the “I Did What I Had To Do To Win” school of situational ethics, Burton and Busch reminded us again of how it used to be done, before championship points became more valued that respect.
Posted by Dave Moody at 7:09 PM