The Ache Is Back

Eric Medlen died today, and I’m wondering what it is about this damned sport that appeals to me. 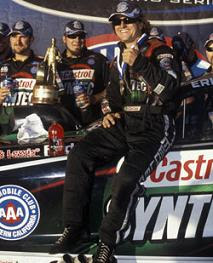 Eric died as the result of a horrific testing crash at Gainesville Raceway Monday. He suffered a severe, closed head injury when his Funny Car slammed into a guardwall, and was airlifted to the University of Florida Medical Center. Some of the finest doctors in the country did everything in their power to save him, even removing the front portion of his skull to relieve pressure and improve blood flow to his injured brain.

They did everything they could to coax a miracle out of Eric’s battered body. But sadly, it wasn’t enough. He never regained consciousness.

"Eric suffered from severe traumatic brain injury with diffuse axonal injury, or DAI," said Dr. Joseph Layon, Chief of Critical Care Medicine at UF. "Survival rates associated with DAI are low. Despite receiving the most aggressive treatment, Eric continued to have uncontrollable intra-cranial pressure. His body lost the ability to manage its salt and water levels, and he began displaying the complicating factors associated with DAI.”

Faced with the inevitable, Eric's family honored his previously stated wishes and removed him from life support, ending a life – and a career – that was remarkable in every way. 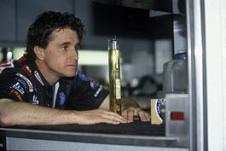 Eric Medlen excelled in everything he ever did. He was a High School rodeo champion, and trained under two-time PRCA World Champion Jerold Camarillo. A professional calf-roping career was easily within his grasp, but instead, he took a mechanic's job alongside his father at John Force Racing. Within a year, Medlen was working as a supercharger technician and clutch specialist on Force’s personal Ford Mustang Funny Car, helping to tune the 14-time World Champion to 50 tour victories and six championships in seven seasons.

When Tony Pedregon left JFR to form his own team at the end of 2003, Force stunned the drag racing world by naming Medlen to replace him. There was no shortage of second-guessing at the time, as railbirds wondered how the greatest Funny Car driver of all time could hand the keys to an untested rookie. Eric immediately proved them wrong, of course, winning a national event at Brainerd in his rookie season, and adding five more victories in 2005 and 2006.

At the conclusion of Sunday’s Gatornationals, Medlen stood fifth in NHRA Powerade points, 94 behind teammate Robert Hight, and seemed poised for a run at the World Championship. Less than 24 hours later, those title hopes ended – along with his life – in a split-second explosion of carbon fiber and steel.

As word circulated of his passing Friday, a familiar feeling returned. The ache deep in the gut, the feeling of emotional emptiness, the lump in the throat that comes when one of our friends – one of our heroes – dies in a racecar. We felt it with Adam Petty on that dark day in May of 2000, and again later that year with Tony Roper. Dale Earnhardt was taken just four months later, and we began to wonder just how much grief one group of people should be expected to bear. We soldiered on – because that’s what we do – and had almost convinced ourselves that racing was okay again when Darrell Russell hurtled to his death at Gateway.

And now, Eric is gone. This is not getting any easier.

Maybe it’s because I’m getting older myself, facing my own mortality as I edge closer to the half-century mark. More likely, it’s because these fallen warriors aren’t just names in the newspaper or faces on TV anymore. They’re friends.

I've spent a lot of time today recalling my last conversation with Eric; a conversation we shared with you on Sirius Speedway. We celebrated his win at Richmond that day, and teased him about his infamous “pool massage” with John Force. I hounded him mercilessly about how much he seemed to enjoy it, and the deeper I plunged the needle, the harder he laughed. Eventually, none of us could catch our breath for laughing.

We did a lot of laughing when Eric was around. He had that affect on people.

I’ll miss Eric the racer, and I’m sad we’ll never know how good he could have been. I ache for his father, John -- who doubled as his crewchief -- and for John Force, who called Eric “the son I never had." But mostly, I’ll miss Eric Medlen the person. He was 33-going-on-12-years old; delightfully goofy and blissfully immature, everywhere but behind the wheel of a racecar. He was a 10-million watt bulb of pure personality that made everyone smile, just by being in the neighborhood.

Now, Eric is gone, and it makes no more sense than it did with Adam, Tony, Dale or Darrell. The ache is back, and I’ve got seven days to figure out why I should ever want to go back to a racetrack again.