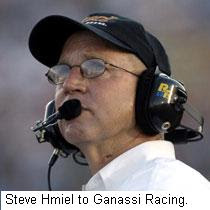 It didn’t take long for Steve Hmiel to find a new job. Just days after announcing his departure from Dale Earnhardt, Inc., Hmiel was introduced today as Competition Manager for Chip Ganassi Racing with Felix Sabates.

Team owner Chip Ganassi made the announcement earlier today, saying, “When good (drivers) become available, you owe it to your organization to make a run at them. The same is true for leaders. Steve became available and I got him. I couldn’t be happier.”

Hmiel will join John Fernandez in the ranks of upper management at Ganassi, handling competition management and preparation of the race cars, while Fernandez oversees the long-term strategic direction of the team.

Asked about his plans for 2008 recently, Bodine said his Germain Racing team had hoped to run at least a limited schedule of races on the Nationwide Series next season, but changed their plans after learning that NASCAR planned to convert the Series to a Car Of Tomorrow-style setup in 2009.

NASCAR spokesman Ramsey Poston moved to quell that speculation today, telling Sirius NASCAR Radio’s Sirius Speedway that while the sanctioning body is looking at options to use the COT chassis in the Nationwide Series, they are “not quite there yet.” Poston said NASCAR is determined to find ways to distinguish the two series’ from each other, making it unlikely that the Nationwide Series will feature the rear wing now used in Cup competition.

Rumors continue to circulate that NASCAR will convert the Nationwide Series to a so-called “Pony Car” class in 2009, utilizing Chevrolet Camaro, Ford Mustang, Dodge Challenger and (possibly) Toyota Solara sheetmetal, in an effort to give the circuit a new and unique identity.
Posted by Dave Moody at 1:39 PM