You Ask, We Deliver! 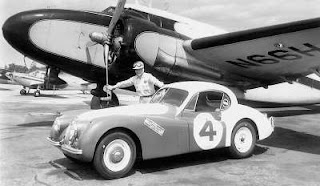 In response to a listener query from earlier this week, here's a photo of Al Keller, posing with his winning Jaguar at New Jersey's Linden Airport. NASCAR's first road-course event was staged over two miles of airport runways there on June 13, 1954. The event was open to American-made and ­foreign cars, and nearly half of the entries in the 43-car field were, in fact, foreign-made. It remains the only win for a foreign-made automobile in NASCAR's top series. Thanks to listener John Wills for forwarding the photo.
Posted by Dave Moody at 3:35 PM