WGR will field the No. 77 Toyota Tundra with driver Brendan Gaughan on the Craftsman Truck Series, and the No. 60 Toyota for a yet-unnamed driver. Gaughan will also steer a WGR Toyota Camry in at least six NASCAR Sprint Cup races in 2008.

The moves marks Gaughan’s second manufacturer change in as many years. The Las Vegas native moved from Dodge to Chevrolet following the 2006 season, and currently ranks 13th in series points following an eighth-place finish at Atlanta Motor Speedway Saturday. Former Craftsman Truck Series champion Jack Sprague currently drives the Wyler Racing ConWay Freight #60, but as Sirius Speedway first reported more than a week ago, Sprague is reportedly headed to Kevin Harvick, Inc. next season as a new teammate for Ron Hornaday, Jr. A spokesman for KHI denied knowledge of that deal last week. 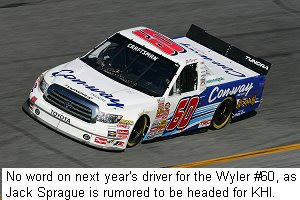 Wyler said of the new pact, “We have watched with great interest the recent partnerships that have formed in the NASCAR NEXTEL Cup garage, and we believe that this is the wave of the future. To have a competitive team at any level in NASCAR, it is crucial to have an almost endless supply of resources available. By combining our efforts, we now have double the talent, and double the resources. We believe we will be one step ahead when we make our move into the Sprint Cup Series in the coming years.”

“My intention has always been to own a NASCAR Sprint Cup team for my son,” said Michael Gaughan. “After examining various options, we decided that partnering with Jeff Wyler and his team would be the best way of working toward that goal.”

Between them, Wyler and Gaughan have a total of 12 NCTS victories.

Tom Buzze has been appointed as General Manager of the new team, which will be located in the Charlotte area.
Posted by Dave Moody at 1:27 PM