Expect an announcement Sunday in Atlanta that David Stremme will run a 20-race schedule of NASCAR Nationwide Series races next season for Rusty Wallace, Inc. 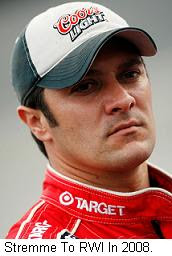 Sources close to the team tell Sirius Speedway that Stremme will split the schedule with youngster Chase Austin, running all the companion events with the NASCAR Sprint Cup Series. Stremme is still rumored to be in the running for the handful of rides still open on the Cup side for 2008, as well. RWI will continue to field a Nationwide Series Dodge for driver Steven Wallace, with both cars sponsored by Homelife Communities.

Robby On Junior: Robby Gordon says he is not surprised by the engine problems suffered by Dale Earnhardt Jr. this season. A year ago, Gordon purchased engines from Dale Earnhardt, Inc., and lost five powerplants in the final six races after announcing that he would move to Ford in 2007.

Gordon said of Earnhardt’s current trouble, "It doesn't surprise me a bit. I've been there. I don't think they're giving him bad engines, but I do think they're probably giving him some experimental engines. He's probably getting some R&D stuff."

Political Ankle-Grabbing Escalates Again: There is apparently no limit to how far Cabarrus County officials will go to kiss-up to Lowe's Motor Speedway owner Bruton Smith.

They immediately reversed course on the dragstrip, unanimously approving the project they had opposed just days before. Efforts are now underway to secure a multi-million dollar tax incentive package to help build the dragstrip, and yesterday, both City and County Councils voted unanimously to ask the state to change the name of Speedway Boulevard to Bruton Smith Boulevard.

Concord Mayor J. Scott Padgett said of the move, "I think it's past time we did this. He was a pioneer in motorsports, and we haven't named anything for him. I guess…you sort of take for granted what you've got."
Posted by Dave Moody at 1:38 PM