Jeff Green is out, and Jeremy Mayfield is in at Haas CNC Racing, effective immediately. 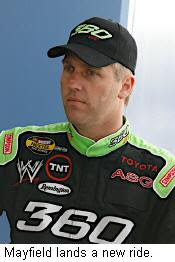 Haas CNC General Manager Joe Custer said today that Mayfield will replace Green in the #66 Chevrolet this weekend, and will join Scott Riggs as part of a two-car lineup in 2008. That would appear to indicate that Johnny Sauter will not return to the team either. Custer confirmed that Sauter is under contract with the team through 2008, but that "we're working through that."

Mayfield’s replacement in the #36 Bill Davis Racing Toyota has not been announced, but a spokesperson for BDR told me late this afternoon that the car will run this weekend at Atlanta Motor Speedway with a soon-to-be announced driver. That driver will not be Jacques Villeneuve.

Petty Enterprises has a longtime affiliation with Dodge, and has recently been in discussions about a possible merger with Gillett-Evernham Racing. Kyle Petty told Sirius Speedway last week that those negotiations are on the back burner for now, while other options are being explored. Talk in the garage this weekend had one of those options involving a jump to the Ford camp.

A spokesman for the team strongly denied that report today, saying that Petty Enterprises has four years remaining on its current deal with Dodge, and will honor their commitment. The team did say that they are trying to put together a deal to run Chad McCumbee on the 2008 Nationwide Series, but that the deal is in no way linked to a manufacturer change. Sources say McCumbee would land in the Carl Haas-owned #14 Fords currently driven by Kyle Krisiloff.

Sprague To KHI? -- The NASCAR Craftsman Truck Series garage was buzzing with a hot rumor of its own this weekend, with speculation that there could be a new superteam in the works.

Unconfirmed reports said that former series champion Jack Sprague will leave the Jeff Wyler Racing #60 team at season’s end to join fellow series champion Ron Hornaday, Jr., in a two-truck effort at Kevin Harvick, Inc. I contacted KHI earlier today, and a spokesman there said they have no knowledge of any such deal.
Posted by Dave Moody at 1:55 PM