2009 Season Could Be Michael Waltrip's Last As A Driver

Michael Waltrip said this weekend that if his on-track performance does not improve, this could be his final season as a NASCAR Sprint Cup Series driver. 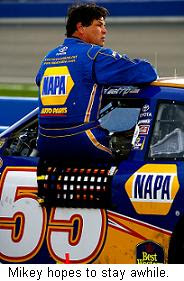 Waltrip said, “My goal is to go win some races this year (and) run up front, so that I don't have to say this is my last year. But if I don't do those things, if I can't compete at the level that Reutimann does -- or NAPA expects -- then I probably won't get to do this again in 2010."

Waltrip finished 29th in the 2008 championship chase, with one Top-5 and two Top-10 finishes in 36 starts. He had a best finish of second ibn the rain-shortened Lenox Industrial Tools 301 at New Hampshire on June 29th, behind winner Kurt Busch. He also qualified on the outside pole for last year's Daytona 500. Reutimann, meanwhile, finished 22nd in points, with four Top-10 finishes and a Coors Light Pole.

“This is a real important year for me, because I still love it," said Waltrip. "I'm still emotional about it. That's a great feeling, (and) I'm glad I have that. I'm glad I feel the way I do, and I'm also glad that I own my car, because if this is my last year, then I'm fine, because that means I got somebody faster or better than me to drive my car in 2010.”
Posted by Dave Moody at 11:40 AM