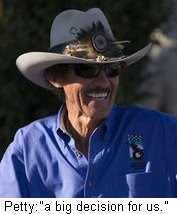 The new team will field three full-time entries this season and a fourth Dodge in eight events, including the Budweiser Shootout at Daytona. Additional races could be added, contingent on sponsorship. The new team will operate out of the GEM shop in Statesville, N.C., and its engine shop in Concord, N.C. Three key Petty employees; Robbie Loomis, Dale Inman and Brian Moffitt will retain roles with the new team, and Ray Evernham will retain a minority ownership role.

Petty said the new agreement ensures that his legendary #43 will remain a part of NASCAR racing for years to come.

“This was a big decision for us, but it’s something we really wanted to do,” he said. “We hope everyone in the sport embraces what George Gillett and I are doing. I want to get back to winning and together we will bring the resources, technology and infrastructure to do that.

“Nothing is going to change for me,” he said. “I’m going to be at the track every weekend, and really involved with the teams and drivers back at the shop. We are very happy. George and I have a lot of work to do, but we have a plan and we’ll be ready for Daytona.”

Gillett, meanwhile, said it is a privilege to help write a new chapter in the Petty family history. 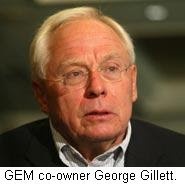 “To join with Richard Petty and Petty Holdings is such an honor for me and my family,” said Gillett. “Richard and I have gotten to know each other well over the last few years, and both of us believe we have formed something that NASCAR fans will support. We plan to keep the Petty name in the forefront of NASCAR."

Kasey Kahne called the move, “pretty exciting stuff. I’ve gotten to know Richard over my five years working with Dodge, and I look forward to being around him more. The Gilletts have done a fantastic job of putting this together. I think you can see their commitment to winning. We could have kept on the same path, but they made a pretty bold statement that they are here to win.”

The merger will not affect the Richard Petty Driving Experience, which will continue to be owned and operated by Richard Petty and Petty Holdings.
Posted by Dave Moody at 7:50 PM