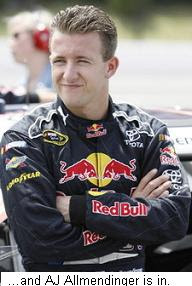 Richard Petty Motorsports has announced just moments ago that AJ Allmendinger has agreed to a contract to race for the team this season, with the team retaining an option for 2010.

Allmendinger will drive the team’s No. 44 Dodge in the Budweiser Shootout, and the first eight races of the 2009 Sprint Cup season, as well as the Coke Zero 400 at Daytona in July. The team is attempting to put together a sponsorship package that would guarantee his participation in the remaining 2009 races, and in 2010.