The latest version of the Bobby Labonte saga has the former Sprint Cup Series champion moving to Earnhardt Ganassi Racing, but at the wheel of the team’s #8 Chevrolet. 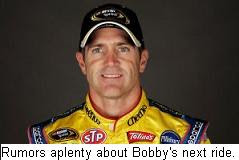 Until very recently, the expected 2009 Earnhardt-Ganassi lineup featured Martin Truex Jr. in the #1 Chevrolet, Juan Pablo Montoya in the #42, Aric Almirola in the #8 and possibly Labonte in the #41. Now, however, sources say that Montoya may be moved to the #41 with sponsorship from Target and Wrigley’s, with Labonte steering the #8 with new sponsorship and crewchief Doug Randolph atop the pit box. Almirola will reportedly drive the #41 car in only a limited schedule, beginning with next month’s Daytona 500. More races could be added if additional sponsorship is found.

Almirola admitted that the idea has been discussed, saying, “If we have to run three cars, it may be a possibility, but it is not our goal. It is something they have kicked around. But really and truly, we want to run four cars.”

Since the DEI and Ganassi teams merged, there has been widespread speculation about the future of the team’s upper management; notably DEI’s John Story and Max Siegel. Now, it appears that Siegel may be looking for a new job.

DEI’s President of Global Operations did not directly address reports of his impending departure, but spoke of his job in the past tense to ESPN.com last weekend. Siegel said, "This has been a great opportunity and I have always been committed to doing what's in the best interests of the sport and the company. I am currently in discussions with Teresa about how I can have the most positive impact on the future of DEI."

And Finally: There is speculation this week that Hall of Fame Racing may be negotiating with Yates Racing to form a technical and/or economic alliance for the 2009. HOF ended a similar technical deal with Joe Gibbs Racing at the end of last season, and owners Jeff Moorad and Tom Garfinkle have said little about the coming season other than that they plan to race in the Daytona 500. Yates Racing currently works closely with Roush-Fenway Racing; a relationship that is not expected to change. The Hall Of Fame/Yates Racing pact could include backing from a new sponsor; internet website Ask.com.
Posted by Dave Moody at 1:26 PM