UPDATED: Stremme Will Have Invisible Sponsor in 2009

Verizon will sponsor David Stremme’s Penske Racing’s No. 12 NASCAR Sprint Cup Series Dodge this season, despite the fact that the company's logo and name will not be allowed to appear on the car.

Executive Vice President Walt Czarnecki confirmed that today, saying, “The car will be identified and branded as the Penske Dodge Charger.” 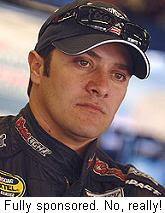 Verizon is barred from appearing on the car because of language in NASCAR’s contract with title sponsor Sprint, which allows pre-existing wireless communication sponsorships to continue, but not to rebrand or change hands. Alltel Wireless is being rebranded as Verizon after a sale of the company last year.

Czarnecki said that NASCAR has been fully informed of the team’s plans, and that he believes the team can accommodate the needs of both their sponsor and the sanctioning body. While the Verizon name and logo cannot appear on the car, transporter, equipment or team uniforms, there is apparently nothing preventing Stremme or other team members from talking about Verizon in pre- or post-race interviews.

UPDATED: NASCAR spokesman Ramsey Poston clarified what Penske and David Stremme are allowed to do to promote their Verison sponsorship. "Stremme cannot represent Verizon, on or off the track," he said. "The Penske organization has a good understanding of the circumstances and Sprint's role in the Series, and we don't think there will be an issue."

Riggs Gets A Ride: Scott Riggs will drive Tommy Baldwin Racing’s new #36 Toyota this season. The team plans on competing in the Daytona 500, kicking off a planned full schedule in the NASCAR Sprint Cup series. No sponsor has been named yet for the #36 Toyota, though Riggs was believed to have an inside track on sponsorship from State Water Heater and Hunt Brothers Pizza.

EGR Cuts Again: Earnhardt-Ganassi Racing reportedly laid off 40 more employees yesterday. Martin Truex, Jr. and Juan Pablo Montoya are the team's only confirmed drivers for 2009, and no details have been released about Montoya’s sponsorship or car number. EGR declined to participate in this year’s NASCAR Pre-Season Media Tour.

New Nose For Dodge: NASCAR has approved a new nose for the Dodge Charger, a move that Dodge teams hope will help their flagging performance on the 1.5 and two-mile intermediate tracks. Penske Racing crewchief Roy McCauley called the change, “very subtle,” adding that most observers would not even notice the difference. 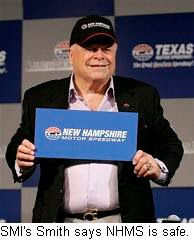 And Finally: Bruton Smith said yesterday that while he still wants to hold a NASCAR Sprint Cup Series race at Kentucky Speedway, he will not take an event away from New Hampshire Motor Speedway. The Speedway Motorsports Inc. Chairman declined to comment on where the race might come from, but sources say the fall event at Lowe’s Motor Speedway could be on the chopping block. No move is expected until at least 2011, and NASCAR has said it will not even discuss a race at Kentucky until former owner Jerry Carroll drops his lawsuit against NASCAR and International Speedway Corporation.

Smith also said he has a way to liven-up the 2009 NASCAR season. He wants Sprint Cup Series champion Jimmie Johnson to punch someone. Smith offered to take the punch himself, and also offered up Texas Motor Speedway President Eddie Gossage as a sacrificial punching bag. No word on whether Johnson will accept the offer.
Posted by Dave Moody at 11:01 AM