Less than two months after clinching the NASCAR Craftsman Truck Series championship, there is considerable doubt whether the former Bill Davis Racing team will field even a single Truck Series entry in 2009. 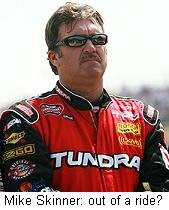 Most of the newly named Triad Racing Technology’s employees were laid-off after the team was sold to new owners Marty Gaunt and Mike Held; told they would be given an opportunity to reapply for their jobs after the first of the year. TRT said Monday that it has rehired more than 80 employees, and are at full operation.

However, former series champion Mike Skinner’s wife, Angie, revealed yesterday that her husband has been told he will not drive for TRT next season. Driver Brian Scott (who was signed to race full-time for BDR in 2009) returned to his family-owned Xpress Motorsports team this week, along with his 2008 crewchief, Jeff Hensley. There is no word on the status of fourth driver, Tayler Malsam.

Shortly after purchasing the team, Gaunt and Held said it would take a month for them to finalize their racing plans. Since then, they have confirmed that the #22 Sprint Cup Toyota will attempt to qualify for the Daytona 500 with an unnamed driver. However, Gaunt stressed that subsequent races will depend entirely on sponsorship, adding that they have no intention of funding race teams out of their own pockets.

Now, there are widespread reports that the team will not race on the NASCAR Camping World Truck Series at all this season. In short, it appears that Gaunt and Held may have purchased BDR – not for its high-profile race teams – but for the lesser-known Triad Racing Technologies, which provides chassis, bodies and engines to other teams.

Late last season, Johnny Benson was widely criticized for the way he left Bill Davis Racing; first announcing his intention to retire before ultimately accepting a new ride with Red Horse Racing. Some may still quibble with his technique, but as of now, it appears that Benson may be the only Bill Davis Racing driver with a ride in 2009.
Posted by Dave Moody at 12:36 PM