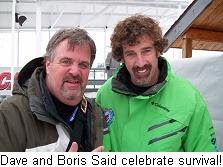 The Godfather is back (intact) from the 2009 Whelen Geoff Bodine Bobsled Challenge, despite three runs down the mountain on Saturday with homocidal maniacs Boris Said and Joey Logano.

"It's unbelievably fast, unbelievably rough, and one of the biggest thrills I've ever had," said Moody. "Now I understand why this appeals to guys whose idea of fun is running 195 mph at Daytona. It's awesome!"

Former NCTS champion Todd Bodine was the fastest man all weekend, winning Sunday morning's individiual competition with a scorching first run that was just enough to hold off a second-heat charge by Joey Logano for the title. He and brakeman Patrick Furman, a National Guardsman from nearby Plattsburgh, N.Y., were the only tandem to crack the 50-second barrier on both of their runs down the winding Mount Van Hoevenberg course. They finished with a combined time of 1 minute, 39.18 seconds, beating Logano by just 4/10ths of a second overall.

"You get a bunch of racers together, and the one thing they all want to do is win," said Bodine afterward. "Coming out of here with a win, I'm tickled. Boris (Said) has been the king, and I finally got to dethrone him."

"I guess I needed about four more tenths," said a beaming Logano. "I went down the chicane really good the first run, then got excited and forgot about the rest of the track and nearly flipped." 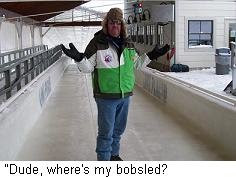 Bodine pushed a little too hard in pursuit of NHRA's Morgan Lucas in afternoon "NASCAR vs NHRA" finals, and ended the final run of the weekend on his lid along with his honorary brakeman, U.S. Men's National Team coach Brian Shimer. Shimer, a five-time Olympian, claimed it was his first time upside-down in a bobsled. 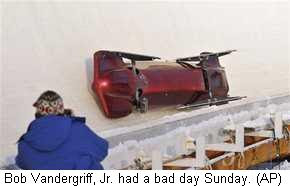 NHRA Top Fuel star Bob Vandergriff, Jr., took the nastiest tumble of the weekend, sliding 3/4 of the course (nearly half a mile) on his head after a scary wreck in the "NASCAR vs NHRA" quarterfinals. There were no injuries, but Vandergriff is undoubtably sore this morning!

"It hurts. Good thing I have a football neck," said Vandergriff. "I've never been upside down in a race car. I don't want to do that anymore. That wasn't any fun."

Two other sleds overturned during the weekend's festivities; including a four-man sled in practice on Saturday. Thanks to all the great sponsors and organizers for a tremendous weekend, to all the drivers who took part, and good luck to the US Men's and Women's teams, who finalized their lineups for the upcoming World Championships in Lake Placid later this winter. 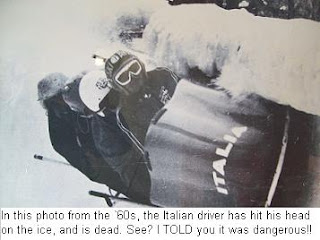