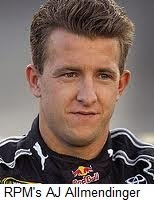 The team's Talladega cars, engines and rear gear assemblies were repossessed by Roush Fenway Racing and Roush Yates Engines early this week, reportedly due to lack of payment. The cars were returned late Wednesday morning.

Allmendinger said the team is preparing cars for the remaining races of the 2010 season, but admitted that he and his management team are working on “worst case scenario options” in case RPM is not able to continue long-term.

However, he said his main concern is for the men and women who work behind the scenes at RPM. “Those are my guys,” he said. “I’m going to be OK at the end of all this, one way or another. But those guys put their heart and soul into this race team every week, six days a week. A lot of them live paycheck to paycheck, and I’ve gone to them and promised them I’ll do whatever I can do help.