Questions abound today about the future of Richard Petty Motorsports, after a bizarre series of events in the last 24 hours put the financial solvency of the operation in doubt.

Yesterday, a number of cars, engines and rear gear assemblies were repossessed from the RPM shops by Roush Fenway Racing and Roush Yates Racing engines. RPM was reportedly left with nothing for AJ Allmendinger, Elliott Sadler, Paul Menard and Aric Almirola – replacing Kasey Kahne, who was released late Wednesday – to drive next weekend at Talladega Superspeedway. Sources say a deal was struck late yesterday to return the Talladega cars, though they are still without engines or rear-end gears.

“The outlook was pretty bleak last night, and it’s not much better now,” said a Richard Petty Motorsports employee earlier today, on the condition of anonymity. “The Martinsville cars are loaded on the transporters and ready to go, but after that, it’s pretty up in the air. Rumors were flying last night, and nobody was being told anything. A bunch of crew guys left the shop last night with their toolboxes with them.” A number of RPM employees have reportedly been warned that they could be unemployed as soon as Monday. Spokespersons for both RPM and Roush Fenway say that no more cars will be delivered.

SOurces say there is a link between the repossession of equipment from RPM and an ongoing dispute between Roush Fenway co-owner John Henry and RPM majority owner George Gillett, Jr. concerning ownership of the Liverpool English Premier League Football Club. Henry’s New England Sport Ventures recently attempted to purchase the club from a group headed by Gillett. Just days before the $477 million purchase could be completed, however, Gillett and partner Tom Hicks filed suit to stop the sale, threatening to sue New England Sport Ventures for approximately $1.6 billion in damages. Henry has vowed to continue his effort to purchase the club, writing on Twitter, “We have a binding contract. Will fight (Gillett’s) attempt to keep club. Their last desperate attempt to entrench their regime.”

Sources tell Sirius Speedway that while coincidental, the dispute is not related to this week’s repossessions. Instead, the dispute apparently stems from a series of past-due bills owed to both Roush Fenway and Roush Yates Racing Engines by RPM. Calls placed to both Richard Petty Motorsports and Roush Fenway Racing seeking comment have not been returned. 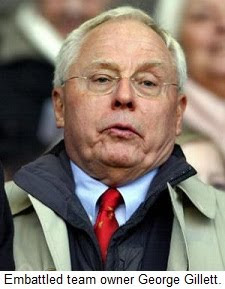 In a related story, Kahne will begin his planned tenure at Red Bull Racing five races earlier than planned, after being released from the #9 Budweiser Dodge late yesterday. Kahne will now drive the #83 Red Bull Racing Toyota for the final five races of the season. Aric Almirola, who had been slated to drive the #83 Toyota, will replace Kahne in the #9 Dodge this weekend at Martinsville.

Reliable sources tell Sirius Speedway that Marcos Ambrose will not accelerate his move to RPM, electing to honor the balance of his 2010 contract with JTG Daugherty Racing. Kahne’s crewchief, Kenny Francis, will be atop the pit box for Almirola this weekend at Martinsville, and said he expects to finish the season with RPM before joining Kahne at Red Bull Racing next season. Francis told ESPN, "If they want me (at RPM), I will be there."

UPDATE: A number of Richard Petty Motorsports employees who had planned to join Kasey Kahne at Red Bull Racing next year were reportedly told by management today that that their services are no longer required, effective immediately. SPEED.com reported today that one of the reasons Kahne was released by the team is that RPM owes him a substantial amount of back salary.
Posted by Dave Moody at 2:41 PM