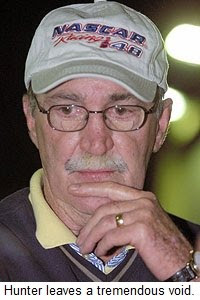 “Jim Hunter was one of NASCAR’s giants,” said NASCAR Chairman and CEO Brian France. “For more than 40 years Jim was part of NASCAR and its history. He loved the sport, but loved the people even more. It seems as if everyone in the sport called him a friend. Jim will forever be missed by the NASCAR community. Our sympathies go out to his entire family.”

Added NASCAR President Mike Helton said of Hunter, “Jim was a uniquely talented man that cannot be replaced. He was a great friend and mentor to so many in the sport. His influence will remain with and be carried on by so many of the people he touched. This is a sad day for Jim’s family and his extended, NASCAR family.”

As a young man growing up in his native South Carolina, Hunter was a football and baseball player at the University of South Carolina. Those years preceded a future of being immersed in the sports world, primarily motorsports. Hunter learned motorsports from “both sides” by working as a newspaper reporter/editor and a public relations representative.

As a member of the media, Hunter was sports editor of the Columbia Record newspaper; he had an award-winning stint at the Atlanta Journal-Constitution; he was a columnist for Stock Car Racing magazine; and he authored a number of books, including a widely-read biography on NASCAR great David Pearson, entitled “21 Forever."

In 1983, Hunter was named to his first executive position in his first NASCAR stint, becoming NASCAR’s vice president of administration. In 1993 he was named president of Darlington Raceway and corporate vice president of the International Speedway Corporation. He remained at Darlington until 2001 when he accepted an offer from then-NASCAR Chairman and CEO Bill France Jr. to return to Daytona Beach to lead an expanded public relations effort aimed at responding to the needs of burgeoning media coverage. 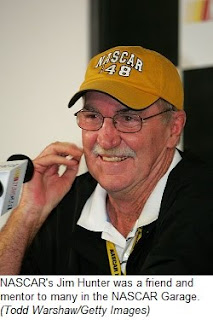 “Jim Hunter was one of the most charismatic people in NASCAR,” said current Darlington Raceway President, Chris Browning. “I always enjoyed seeing Hunter at the track and particularly enjoyed his participation in our 2009 historic racing festival. It was great seeing Jim joke and swap old stories with some of the true pioneers of NASCAR. Everyone at Darlington Raceway will certainly miss Jim’s smile, stories and laugh. Our thoughts and prayers go out to his family during this difficult time.”

Former South Carolina governor and Darlington native, David Beasley worked extensively with Hunter during his tenure as president of the track, and remembers Hunter as a community leader and inspiration. “Jim Hunter is going to be missed,” he said former. “I don’t know of anyone who loved God, his family, NASCAR, his hometown Darlington, his state and country more. He taught me you only go around the track of life once, so give it your best.”

Hunter is survived by his wife of 48 years, Ann Hunter; his children, Scott Hunter and Amy McKernan and his grandchildren Dakota Hunter, and Hunter and Luke McKernan. In lieu of flowers the family asked that donations be made to The NASCAR Foundation or Hospice of Volusia/Flagler County. Funeral arrangements will be announced later.
Posted by Dave Moody at 10:47 AM