The NASCAR Sprint Cup Series will have a new look in 2013, emphasizing brand identity in much the same way the NASCAR Nationwide Series does with its new cars. Sirius NASCAR Radio's Sirius Speedway with Dave Moody has learned that all four automakers have already begun work on the new cars, after obtaining NASCAR approval for more points of similarity between their street cars and the NASCAR versions.

Sprint Cup Series Director John Darby said recently that NASCAR has solicited input from all four manufacturers, and that “2013 is the right year to do this, as it aligns with new models.”

The automakers have already submitted drawings of their proposed 2013 NASCAR Sprint Cup Series racers to the sanctioning body for preliminary approval. A number of revisions are expected, as NASCAR seeks to balance its desire for brand identity with the need for a common aerodynamic footprint between brands. 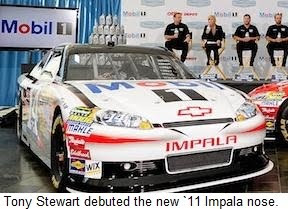 The changes will be strictly cosmetic, with the current Sprint Cup chassis remaining unaltered. Body modifications will be made, said Darby, “to help the identity and the look of the cars.” He also placed some of the blame for similar-appearing models on the manufacturers themselves, saying they “fell into (a) stagnant period where all the cars looked the same in the showroom, too. Manufacturers are working really hard on new models that don’t look like everyone else’s. We’ll do everything we can to help them with the process.”

Speaking on the condition on anonymity, one manufacturer representative credited NASCAR Nationwide Series Director Joe Balash with paving the way for the new, more stock-appearing cars. “NASCAR was not sold on the idea of revamping the look of these (Sprint Cup) cars,” he said. “But Joe pushed hard for it in the Nationwide Series, saying it was important to give those cars a distinct, stock-appearing look. The manufacturers were thrilled with the results, and once NASCAR saw the fan reaction that came with the new Nationwide car, they started thinking seriously about similar changes on the Cup side.”

In a related story, Dodge’s new 2011 Sprint Cup Series nose has now been approved by NASCAR, leaving only Ford Motor Company awaiting final approval. The new pieces are smoother and more aesthetically pleasing than the current splitter-based assemblies, with a single, molded piece replacing the two-piece splitter/bumper combination and its cumbersome metal braces. Ford is expected to have its new nose approved shortly, with implementation at SpeedWeek 2011 in Daytona.
Posted by Dave Moody at 10:53 AM