Eric McClure confirmed to Sirius NASCAR Radio’s Sirius Speedway with Dave Moody that he will move from Team Rensi Racing to Tri-Star Motorsports for the 2011 NASCAR Nationwide Series, with sponsorship from Hefty. 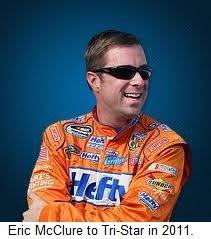 "It does look like that’s where we’re going to go,” said McClure. “We are going to move over to TriStar Motorsports. Things have kind of skyrocketed in the last 24 hours, and it looks like we’re going to be able to get the deal done.”

He said conversations are underway with 2010 Tri-Star drivers Jason Keller and Tony Raines about ways for them to remain involved, adding, “It’s a great opportunity for me to go over there and learn from two veterans.”
Posted by Dave Moody at 5:26 PM