Random Thoughts On The Final Monday Of The NASCAR Season

Dale Earnhardt Jr. reiterated for the 732nd time Sunday that he doesn't want to talk -– or think -- about a possible crewchief change on his #88 Chevrolet until after this weekend’s season finale at Homestead-Miami Speedway. Junior told The Sporting News, "I ain't really making any decisions on that until after the season's over with. I asked Rick (Hendrick) and everybody in the corporation if I could not consider any options for next year… until we're done racing.” 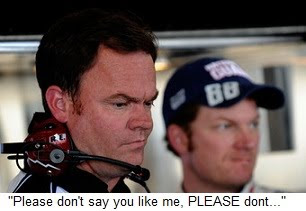 In comments eerily similar to those he made about former crewchiefs Pete Rondeau and Tony Eury, Jr, before their departures, Earnhardt said, “I've really enjoyed working with (Lance McGrew). I've enjoyed even more so becoming his friend and getting to know him as well as I have. I have a lot of respect for him, and he's put up with a lot of crap this year and last year, trying to help get this thing going. He gave me his best effort to try to help each weekend, and I've just got a lot of respect for him."

NASCAR’s perennial Most Popular Driver is winless since June of 2008, and stands 19th in championship points after missing the Chase for the second consecutive year. He started 31st and finished 14th at Phoenix yesterday and called the ongoing performance issues surrounding his team, “a moving target."

Job Hunting: Is anyone else buying this sudden burst of interest in NASCAR by out-of-work Indy Car drivers? Both Tony Kanaan and Dan Wheldon have spoken with Kyle Busch recently about possible 2011 opportunities with Shrubby’s Camping World Truck Series team. Those discussions are being called preliminary in nature, and both drivers are honest enough to admit that their preference is to remain in open wheel.

For the record, any deal struck with KBM will be contingent on sponsorship, and if Kanaan and Wheldon had sponsorship, they’d still be in Indy Cars. Both Tony and Dan are good guys and great drivers who would energize the Truck Series with their personalities alone. But when did NASCAR become the fast food gig you take after getting canned from your “real job?”

The Mania Continues: Danica Patrick had another rough day at Phoenix International Raceway Saturday, qualifying 28th and jostling her way to a 32nd place finish in the Nationwide Series WYPALL 200. The highlight of her effort was the payback-bump administered to young Alex Kennedy, after Kennedy leaned too heavily for her liking on the driver’s door of the GoDaddy.com Chevrolet. Her “bump back” elicited a veritable standing ovation from her team, but did little to improve her eventual finish.

In 11 Nationwide starts this season, Patrick has an average start of 28.8 and an average finish of 28.4, making one wonder exactly what Steve Arpin did that was so wrong?

In Case You Haven’t Noticed: Here’s proof -– as if any is needed -– that non-Chase drivers fly considerably under the radar at this time of year. Heading into Sunday’s race at Phoenix International Raceway, only three 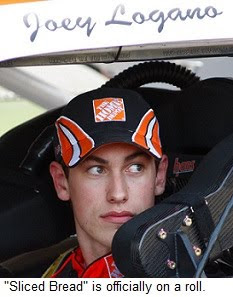 After suffering through the growing pains expected of any young driver in his first two years on the Sprint Cup circuit, “Sliced Bread” and veteran crewchief Greg Zipadelli seem ready to begin the 2011 campaign right now!

And Finally: The only way Denny Hamlin can guarantee himself the 2010 NASCAR Sprint Cup Series championship Sunday is by winning the Ford 400 at Homestead-Miami Speedway, or finishing second while leading the most laps. That scenario is exactly what the boys in the big mahogany offices in Daytona Beach had in mind when they dreamed up the Chase format a few years ago.
Posted by Dave Moody at 1:32 PM