Richard Petty Motorsports minority owner Ray Evernham confirmed today that Petty is assembling the financing necessary to bid for control of the troubled team, and said he will do whatever he can to ensure the success of that venture. 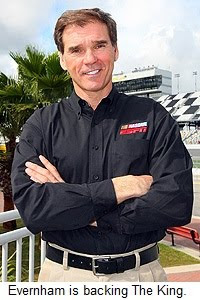 Evernham told Sirius NASCAR Radio’s Sirius Speedway with Dave Moody, “I’m going to do everything I can to help (Richard). The situation surrounding that team lately has been a... legal and financial nightmare. I don’t have an interest in owning a piece of the team anymore, but if it comes down to helping Richard bridge a financial gap for the time being, I would absolutely do what it took to help him achieve his goal.”

Evernham expressed confidence that Petty will be able to field a full roster of four cars in the remaining races of the 2010 season. “(Richard) has a lot of people behind him,” said Evernham. “He is doing the right thing for racing and doing his best to keep a lot of people employed.”

Despite still owning a minority stake in the team, Evernham said, “I don’t get communication from George Gillett. I haven’t spoken to him in months. All I know is that there are good things happening from the Richard Petty side of things. The #43 and Richard Petty need to be in NASCAR, both now and in the future. There are lots of people -- including me and in addition to me -– who want to see him succeed.”

One of the team's drivers, Stanley Tools Ford driver Elliott Sadler, said news of Petty’s involvement has helped calm fears among team employees about the future of the company. “I think people were more scared at Martinsville than they are now," said Sadler. "Richard Petty has gotten a lot more involved in the last couple of weeks and that has put people at ease. I’m confident that we’re going to be here for the remainder of the season.

"Richard Petty deserves to be part of this sport," he said. "He’s a good guy, and he’s lots of fun to race for. It wouldn’t seem right to be at the racetrack without seeing that cowboy hat and sunglasses.”
Posted by Dave Moody at 2:16 PM