For the first time in his nearly five-year run at the top of the NASCAR Sprint Cup Series standings, Jimmie Johnson’s mettle is being tested to the limit. 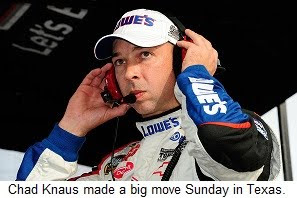 That much was clear Sunday night at Texas Motor Speedway, as Johnson’s over-the-wall pit crew made mistake after mistake in the heat of a red-hot championship battle, before being replaced by Jeff Gordon’s Dupont Chevrolet team. With Gordon out of the race following a bizarre yellow-flag crash with Jeff Burton – and the spirited shoving match that followed – crewchief Chad Knaus pulled the trigger on a move unprecedented in the history of NASCAR. He benched his bumbling over-the-wall gang, bringing in Gordon’s tire changers for the remainder of the race. The move was effective to a degree, as the 24 team performed flawlessly on its final three pit stops and allowed Johnson to rebound for a ninth-place finish at day’s end. The karmic damage done to the once-unbeatable Lowe’s Chevrolet team, however, has yet to be assessed.

"At this point in the game, you can't have feelings," said Johnson, who left the Lone Star State 33 points behind Denny Hamlin with just two races remaining. "If somebody's feelings got hurt, too bad. We're here to win a championship, and we have to do everything we can."

Crew swaps happen all the time in NASCAR. Richard Childress Racing moved Clint Bowyer’s team to the Kevin Harvick pit a few weeks ago to address a similar lack of pit road performance. But that move happened at mid-week, not mid-race. Nobody got fired on national television, and nobody was forced to stand and watch while replacement players took over their job in the biggest race of the season to date.

"It's a professional sport, and you see it all the time," explained Knaus. "If somebody's… not getting it done in football, you get a different receiver in the game, or a different quarterback. Our guys weren't hitting on all eight cylinders and we had an opportunity to bring those guys in. They came in and played relief, and I thought they did a good job. It's unfortunate. I don't like doing that stuff, nobody does. But it's kind of your job."

Others, however, saw the move as a sign of weakness, a panicky, desperation move by a team unaccustomed to having to play from behind when the chips are down.

"You put the two pit crews toe-to-toe, and those guys are going to make mistakes," said Fed Ex Toyota crewchief Mike Ford, who long ago identified Johnson’s pit road issues as a weakness to be exploited. Ford intentionally chose the pit stall next to Johnson Sunday, hoping the pressure of performing head-to-head would cause the 48 team to fail. “We've seen it this year, and we (intentionally) went beside them,” said Ford. “Those guys faltered, and it made them panic and push to the point where they made changes.

“Jimmie, Chad and Rick (Hendrick)… just took their team out of it,” said Ford. “Their team got them to this point and they pulled them out.” 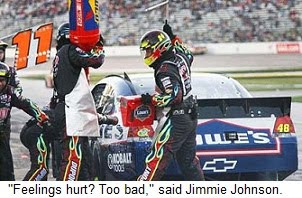 Knaus promised to speak to his embattled team Monday at their North Carolina shop, but nothing he says will undo the decision made Sunday night, in the heat of battle. For the first time in nearly half a decade, the man with all the answers said he has no idea what lies ahead. "I don't know what we're going to do,” said Knaus. “We'll have to wait and see. Everything's on the table. Everything.”

For his part, Johnson said his bottom line is performance, hurt feelings be damned. "I'm not sure what the implications are going to be (back at) the shop," he said, "but we've been lacking and we needed to get it straightened out. I really do care for these guys from the bottom of my heart. They're my guys, (but) we have to perform. We can't come down pit road and lose 10 spots every stop. That's just killing us.

"The alarm clock's been ringing for quite a few months."

No one knows what decisions will ultimately be made, or who will man the air guns this weekend at Phoenix International Raceway. Some members of Johnson’s crew have been together for all four championship seasons, forging a battle-tested camaraderie that – until Sunday – seemed utterly unshakeable. That’s all changed now, no matter who jumps over the wall at Phoenix. Unconfirmed reports had tire changer Mike Lingerfelt leaving the track in anger immediately after the move. For others, the palate of emotions ranged from anger to embarrassment to concern for their jobs.

The unbeatable, unassailable Team 48 was rocked to its core Sunday by a move Ford called, “more about trying to win a championship for the company (than for) the team.” Its image of invincibility has now been shattered, leaving only unanswered questions about how they will respond.