Even After Phoenix Stumble, The Odds Still Favor Hamlin

Carl Edwards delivered his customary Victory Lane back flip at Phoenix International Raceway Sunday, on an afternoon when the Sprint Cup championship chase also got turned upside down.

Edwards’ victory trumped an afternoon of complete and utter dominance by championship point leader Denny Hamlin, whose Joe Gibbs Racing/Fed Ex Toyota appeared headed for an easy win until poor fuel mileage forced him to pit road with just a handful of laps to go. Hamlin led a race-high 190 laps Sunday, soaring over the competition like the Luftwaffe over London while fellow contenders Jimmie Johnson and Kevin Harvick struggled with mediocre race cars and – in Harvick’s case – a horribly timed miscue that forced him back to pit road to tighten a loose lug nut.

The door appeared wide open for Hamlin to take a cushy, 60-point lead into the final race at Homestead-Miami Speedway. Then that door came slamming shut. 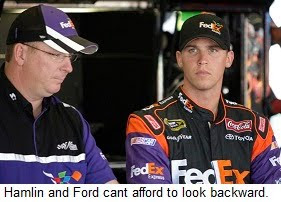 Poor fuel mileage and a lack of late cautions forced crewchief Mike Ford to play it safe, calling his driver to the pits for a green-flag fuel stop with 14 laps remaining. Hamlin relinquished the runner-up position and returned to the track in 19th place, slashing his way forward in the final laps while Jimmie Johnson milked his fuel cell at near-pedestrian speed to finish fifth, one spot ahead of a resurgent Harvick. Somehow, in the blink of an eye, Hamlin’s dominant day had wilted into a 12th place finish; with his 60-point lead suddenly a paltry, 15-point bulge.

"That was ugly," said Ford on the cool-down lap. "That’s something we've definitely got to work on. Fuel mileage. That was awful."

"It's tough not to be happy (with) the point lead going into the last race,” said a crestfallen Hamlin afterward. “But we were sitting pretty."

Johnson, meanwhile, basked in the afterglow of a day that was the NASCAR equivalent of found money. After winning the last three fall races at PIR, his Lowes Chevrolet was never in the hunt Sunday, and he welcomed the late turn of fortune that kept his drive for a fifth consecutive Sprint Cup title alive.

"We have one heck of a points race going to Miami and I'm pumped," he said. "I am so happy to put pressure on the #11 team. We're ready to race for this thing. (It’s) one race, winner take all, and it's going to be a hell of a show.” Johnson also attempted to turn the trash-talking tables on Hamlin, saying, “I hope the pressure of us being on his heels really works on his mind throughout the course of the week."

Hamlin must ensure that it doesn’t.

In the aftermath of their Phoenix misfortune, it’s tempting for Hamlin and company to focus on the negatives. But there is no time to think about what might have been. Instead, they must focus on the reality of what is. They enter this weekend’s season finale at Homestead-Miami with 15 points in hand; a far better fate than awaited any of Johnson’s challengers in the last four years. They are the Sprint Cup point leaders, and have consistently fielded the fastest cars on the racetrack in recent weeks.

If Johnson is going to complete his quest for a record fifth consecutive title Sunday, he’ll have to do it by coming from behind. And if recent history is any guide, he’ll have to beat a red-hot driver with a better racecar and a superior over-the-wall pit crew. Can it be done? Absolutely. It happened at Phoenix, and it can happen again at Homestead.

But if you’re Denny Hamlin, you’ve got to like the odds.
Posted by Dave Moody at 10:39 AM