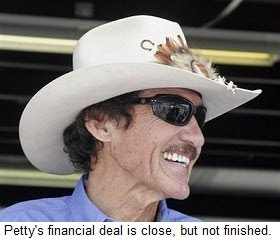 Richard Petty says that the team bearing his name will be a part of the NASCAR Sprint Cup Series next season. Petty declined to offer specifics on potential investors in his bid to wrest control of Richard Petty Motorsports away from majority owner George Gillett, but sources say talks with Medallion Financial Group are nearing fruition. Petty said his previous assessment of RPM as a team “in limbo” was not longer accurate. "We're going to make it," he said, "(but) that's all I can say now."

Multiple sources at RPM have told Sirius NASCAR Radio’s Sirius Speedway with Dave Moody that they expect to learn their fate during a mandatory 8 AM ET Monday meeting. It is likely that the team will close its doors for at least a day, before reorganizing under a new, Petty-led ownership group later in the week. Multiple layoffs are expected, but those layoffs would almost certainly have taken place anyway, as the team contracts from four Sprint Cup Series entries to two.

Petty met with officials of Ford Racing Saturday, and Ford spokesman Kevin Kennedy said the automaker is “confident it will get worked out.'' Ford Motor Company’s Edsel Ford II said this weekend that Ford has “done everything we can'' to help the team survive. “Quite frankly,” he added, “a lot of their suppliers have done the same."

Ford Director of North American Motorsports Jamie Allison called the talks, “is a daily conversation that goes on between the team, its new investor and its new partner," adding, "We want to see an orderly transfer of ownership to Richard Petty and his new ownership group. I am more confident today than I was at the start of this development.

"But we await just like you — confirmation from the team.”
Posted by Dave Moody at 10:46 AM