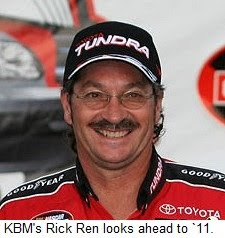 "We want to run two full-time Truck deals next season, but I don’t know if that is going to happen or not," said Ren. "Sponsorship is pretty tough out there right now, but there are still some irons in the fire. Even for Kyle, we only have a few races sold for next year. There are definitely some holes that we’re still trying to fill."

Ren said he hopes to put together a similar lineup of drivers for KBM's #18 Toyota next season. "We’d like to have a Cup driver for some races and a young guy for a few more races; three or four drivers overall. Then we’d like to run another truck full-time for the driver’s championship."

He said discussions are ongoing with potential drivers for that championship effort, but that nothing has been finalized. "We’ve talked with a few (drivers) and we had a meeting today with a potential guy," said Ren. "Unfortunately, some of them are trying to sell sponsorship to companies that are new to the sport, and they don’t understand that right now is the time to build your team for next year. In January, you’re not going to find the people you need."
Posted by Dave Moody at 6:33 PM