COMMENTARY: It's Time For Kyle To Change His Ways

A few years ago, former Joe Gibbs Racing driver Tony Stewart was called on the carpet by his team and its sponsors after squandering a potential win with one of his infamous piques of temper. Stewart’s team reportedly took a vote that week on whether to retain him as driver, and then-sponsor Home Depot informed him – in no uncertain terms – that his conduct was unacceptable and had to change.

Perhaps it’s time for someone to have a similar “Come To Jesus Meeting” with Kyle Busch.

Busch’s car was fast enough to win Sunday at Texas Motor Speedway. He wasted little time overcoming a 29th-place qualifying effort, running as high as third before a piece of debris lodged in his front splitter and forced him to drop back. Busch then spun out on lap 160, and got busted for speeding while trying to avoid losing a lap to the pace car on pit road.

That’s when it all came unglued, as Busch’s hair-trigger temper once again short-circuited his team’s chances for victory. He erupted in a storm of expletives when informed of the penalty; a four-letter tirade that prompted NASCAR to summon him to pit road for further consultation. He then made a bad situation even worse, making an obscene gesture to a NASCAR official and earning a two-lap “unsportsmanlike conduct” penalty from the sanctioning body. A fast race car was not enough for Busch to dig out of his self-inflicted hole, and he finished the race two laps down in 32nd place; his third finish of 30th or worse in the last four events.

The driver that many predicted to win the 2010 Sprint Cup championship has now finished no better than 13th in the last six Chase races, plummeting to seventh in points. His second playoff meltdown in as many seasons comes as his teammate, Denny Hamlin, uses similar physical skills and a far-superior mental outlook to contend for the championship. Busch’s latest collapse raises valid questions about whether one of the best pure wheelmen in the history of the sport possesses the mental toughness needed to contend for anything more than race wins. 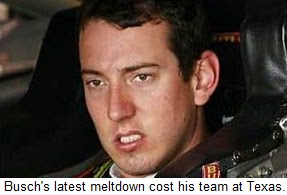 When it comes to winning championships, handling pressure is as important as handling an uncooperative race car. All the car control in the world won’t make up for a lack of self control by the driver. Busch’s volatility is both his best and worst quality. His unwillingness to accept anything but first place has driven him to become the multi race-winning driver he is today. His propensity for coming unhinged at the first sign of adversity, however, prevents him from accomplishing anything more significant than that.

Busch may face additional penalties later this week. NASCAR Director of Communications Kerry Tharp made it clear that the sanctioning body will not allow its officials to be disrespected the way Busch did Sunday. Kyle eventually apologized for his actions, saying, “I'm sorry… to everybody on this team, to everybody at NASCAR and all of my guys that support me.” Unfortunately, that apology came long after the damage was done.

Team President J.D. Gibbs spoke to the media after Sunday’s race and said it was time for Busch to begin controlling his emotions. “I think that's something that he's going to have to continue to work on,” said Gibbs. “I think he acknowledges that. But right when it happens, it's hard for him to control. That’s an area… in life he's going to have to address. We've got to make sure it happens sooner rather than later."

Hopefully, Gibbs will make similar comments – in considerably stronger terms – to Busch in the next few days, putting him on a path to eventually fulfill his enormous potential.
Posted by Dave Moody at 1:47 PM