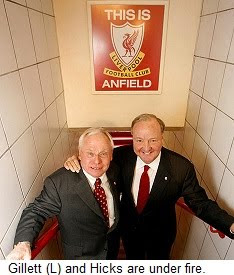 Richard Petty Motorsports majority owner George Gillett has fired the Board of Directors of his Liverpool soccer club in an attempt to derail a takeover of the club by New England Sports Ventures, owners of the Boston Red Sox.

The board was scheduled to meet yesterday to consider bids from two potential buyers, but Gillett and co-owner Tom Hicks filed an injunction claiming the board was not acting in their best interest by entertaining those offers. The injunction sought to replace board chairman Martin Broughton and directors Christian Purslow and Ian Ayre with Hicks’ son, Mack Hicks, and Lori Kay McCutcheon, giving Gillett and Tom Hicks majority control of the club.

Broughton was hired by Gillett and Hicks after their lein holder, Royal Bank of Scotland, demanded that they expedite the sale of the team. Broughton and his fellow directors are contesting the injunction.

New England Sports Ventures is controlled by John W. Henry and a group of partners that includes the New York Times Company and television producer Tom Werner. They purchased the Red Sox in 2002 and a subsidiary of NESV – Fenway Sports Group -- purchased a 50% ownership stake in what is now Roush Fenway Racing in February of 2007.

NESV is offering approximately £300 million for the club; enough to cover the £280 million in loans and fees owed to Royal Bank of Scotland by Gillett and Hicks. That loan became due in October of last year, but RBS has been reticent to take over active management of the team.

Gillett and Hicks are determined to profit from any sale of the team, and insist that it is worth significantly more than the £300 million offered. RBS is currently considering whether to refinance Gillett and Hicks or force them out.
Posted by Dave Moody at 10:15 AM