Gordon: No Need To Talk To Kurt

Jeff Gordon told Sirius NASCAR Radio’s Sirius Speedway with Dave Moody that he has not spoken with Kurt Busch about the Martinsville run-in that left him with a damaged race car and a 20th place finish. 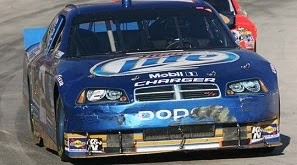 “There have not been any conversations with Kurt, and I doubt that there will be,” he said. “The way I look at it, I race everybody the way they race me. I’m smart enough to know who I’m racing, and I look at every crash I’ve ever been in and ask what I could have done different. I dove in under him a little late and figured his spotter would see that I was there. I gave him a reason to lose his temper and wreck me, and I blame myself for that.”

Gordon bumped Busch while passing him with 115 laps remaining in Sunday's TUMS Fast Pain Relief 500, and Busch returned the favor in spades, spinning Gordon into the inside retaining wall on the frontstretch. The incident was the second between the two this season, after Gordon wrecked Busch on the road course at Infineon Raceway on June 20.

"There was good racing all day amongst a lot of guys,” said Busch afterward. "There was respect given for guys when they were getting back to the inside. He shoved me in there and I shoved him back in Turn Four. I didn’t mean to get into him that hard, but over (my) years in the 97, (Gordon was) wrecking the 2 car. Whether you’re a current Kurt fan or ex-Rusty fan, he’s wrecked the 2 car a lot here."
Posted by Dave Moody at 8:27 PM