Richard Petty Motorsports majority owner George Gillett, Jr., made a major move to shore-up the financial standing of the team today. His Booth Creek Resort Properties LLC sold its stock in the companies that operate the Northstar-at-Tahoe Ski Resort to Vail Resorts Tuesday for $63 million. 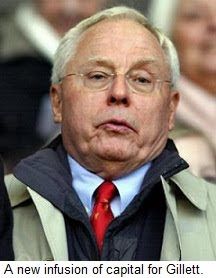 Gillett reportedly owes approximately $70 million to Wachovia Bank from his purchase of the team formerly known as Evernham Motorsports. It is also believed that he continues to make payments to Evernham for the team, and Evernham told Sirius NASCAR Radio’s Sirius Speedway with Dave Moody that Gillett is current in his payments. The former car owner and championship-winning crewchief declined to discuss the inner workings of the team, beyond confirming that he receives regular updates on RPM’s finances.

“As far as I know, there are three spoons in the pot,” said Evernham. “George Gillett is the majority owner, I’m second and Richard is third.” He declined to divulge specific percentages of ownership, or confirm published reports claiming that Petty owns only four percent of the team.

Informed sources say that without the infusion of capital, RPM would not have been able to compete at Talladega Superspeedway this weekend, despite the return of the team’s Talladega chassis and engines by Roush Fenway Racing and Roush Yates Racing Engines late last week. That equipment was repossessed earlier due to lack of payment, but Jack Roush now says RPM’s account is paid in full. Several RPM crewmembers said they were unsure whether the team would still be operational when they returned from Martinsville Speedway, but direct-deposit payroll obligations were made late last week, and the shop is operating as usual today.

The team’s financial future was cast into doubt recently when the English Premier Soccer League approved the sale of Gillett’s Liverpool club to New England Sports Ventures for $476 million. That sale price was considerably less than Gillett and partner Tom Hicks insisted the team was worth, and came only after they dropped a temporary restraining order blocking the sale.

Gillett threatened to sue NESV for $1.6 billion in damages, but attorney Tom Melsheimer confirmed late last week that the suit had been dropped in accordance with a British court order. He hinted that the legal battle would continue, however, saying "a different picture will be painted" when the court hears Gillett’s version of the facts.

There is no word on whether today’s $63 million cash infusion will allow RPM to compete for the remainder of the 2010 season, or on how it might impact Richard Petty’s attempt to secure financing for a purchase of Gillett’s ownership stake.

Jack Roush confirmed Sunday that Petty is attempting to assemble a group of backers for such a move, but Petty said only, "I've been here since 1949 and I'm going to be here till they run me off. I haven't got anything to tell you except speculation… and that ain't going to get anybody anywhere. When we do get all of it together, we'll get it together.”
Posted by Dave Moody at 7:52 PM