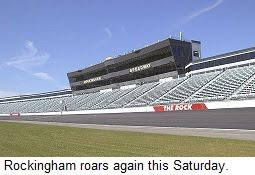 Hopefully, history will not repeat itself.

"The Rock" was crossed off NASCAR’s Sprint Cup schedule in 2004 when fans abandoned its legendary high-banks in favor of more modern venues. I was there for the track’s final race in late 2004, and everyone knew Rockingham was on shaky ground. Fans had a chance to send a message that day and avoid having one of the country’s most storied stock car venues excised from NASCAR’s Sprint Cup, Nationwide and Camping World Truck schedules.

Instead, they responded with a collective yawn, filling about half of the available seats for the “Subway 400.”

Rockingham appeared to have reached the end of the line. Where the thunder of stock cars once filled the Sunday afternoon air, there was nothing but silence and the memory of what once had been. The track sat idle for three long years, collapsing upon itself as many of the fans who refused to support it loudly bemoaned its demise.

Then, against all sane advice, former ARCA and Nationwide Series racer Andy Hillenburg purchased the historic, D-shaped oval. “Indiana Andy” brought the speedway back from the brink, reopening “The Rock” amid great fanfare in 2008. He drew a solid crowd for his first event; an ARCA race that featured a stirring battle between NASCAR veteran Kenny Schrader and teen sensation Joey Logano. Since then, however, fan support has dwindled again, despite Hillenburg’s best promotional efforts and bargain-basement admission prices.

Hillenburg has plans for the track that go well beyond regional Late Model racing. Rumors have circulated recently about a possible return of the NASCAR Camping World Truck Series to Rockingham, but in order to do that, the track will have to install hundreds of feet of SAFER barriers at a cost of nearly a million dollars. Hillenburg says he can get the money, but only if area race fans do their part by supporting the speedway.

"A lot of people have their eye on Rockingham this weekend," said Hillenburg this week. "For a lot of reasons." 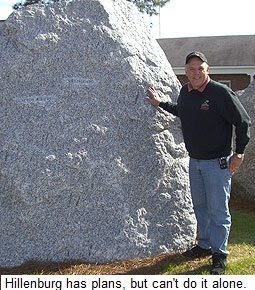 There will be a number of familiar names in Saturday’s ARCA field, including former Rockingham Sprint Cup Series winner Steve Park, who returns to the site of his emotional 2001 victory in a car painted identically to his former Dale Earnhardt, Inc./Pennzoil Chevrolet. Camping World Truck Series favorite Ricky Carmichael is in tomorrow afternoon’s field, as is Ty Dillon, grandson of Richard Childress and younger brother of Truck Series star Austin Dillon. Notable in the UARA field is recently crowned 2010 Rookie of the Year Robert Johnson, whose NASCAR Hall of Fame father, Junior Johnson, will be in attendance to guide his son’s effort.

Despite a dirt-cheap $20 advance ticket and bargain-basement family packages, Hillenburg said sales through the track’s website -- www.rockinghamracewaypark.com -- have been steady, at best.

Hopefully, a picture-perfect weather forecast will draw fans out in droves to support Rockingham Speedway on this “make or break” weekend. Hopefully, local fans have learned from their past mistakes and realize the importance of putting their money where their mouth is Saturday, proving to Hillenburg, NASCAR and anyone else that cares to listen that racing is once again a going concern at “The Rock.”

The first green flag of the day flies at 11:00 AM Saturday morning, with the headline ARCA event set to roll at 1:30.
Posted by Dave Moody at 12:23 PM