Calls and e-mails to Wood Brothers Racing seeking confirmation were not immediately returned, but Richard Childress Racing Director of Corporate Communications David Hart confirmed his team’s share of the transaction today, saying, “Thomas Pumpelly divested from his partnership with TRG Motorsports on January 27 and took with him the #71 (owner) points. He has joined RCR as an equity partner and the #27 Menard’s Chevrolet will be operating with the #71 points. Pumpelly will be listed (as owner) on the entry.” 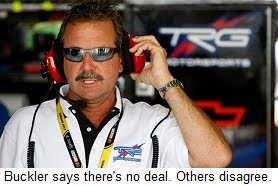 Earlier today, TRG owner Kevin Buckler denied that an owner point transfer had taken place, saying, "We’re going to stand on our own two feet. We had a lot of people contact us about doing various owner point deals, but we decided to say `no' to them all. We’re going to put Andy Lally in the #71 car for the Daytona 500 and go racing.”

Told of Buckler’s statement, RCR’s Hart said, “That’s not what I have been told, and my information comes from the highest authority.”

Sources speaking on the condition of anonymity tell Sirius Speedway that Buckler will compete at Daytona using owner points accrued last season by the #98 Richard Petty Motorsports Ford, though that could not immediately be confirmed.

Why is Gillett’s name being used, instead of Richard Petty’s? Because Petty reportedly owned just 4% of the team that bore his name last season, and NASCAR requires owners to hold at least a 10% stake in order to sell owner points.

Thus, for the second time in the last three seasons, a major NASCAR Sprint Cup Series team will be “owned” by a man who is no longer involved in the sport. In 2009, Bobby Ginn was listed as owner of a Dale Earnhardt, Inc., Chevrolet, nearly a year after slinking out of town amid a twisted trail of broken promises and unpaid bills. Now, it’s Gillett, who appeared in the Cup garage just slightly more than Jimmy Hoffa last season, before leaving his team high and dry with a handful of races still to be run. In his wake, he reportedly left a veritable Mt. Everest of debt for suppliers, employees and former partners to bear. The vast majority of that debt was either written off or left unpaid while Gillett – amazingly – walked away unencumbered. 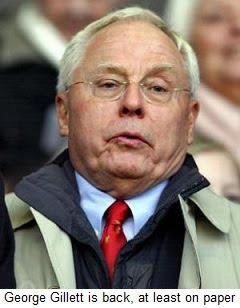 Ray Evernham, who owned 20% of RPM last season and has yet to be paid in full for his share of the team, said he was given no say in this most recent transaction, leaving him with no way to recoup any value from the team that once bore his name. Evernham declined to comment on the deal today, other than to say, “I am not surprised at the way this was handled by my former partners."

Today’s owner point swap illustrates yet again why it’s long past time for NASCAR to outlaw such chicanery, once and for all. Any loophole that allows people like Bobby Ginn and George Gillett to remain a part of this sport – even in name only – is a loophole in need of closure. Richard Petty, Richard Childress and the Wood Brothers deserve no blame in this latest perversion of process, They are merely availing themselves of a rule that long ago outlived its usefulness. Make no mistake about it, however, today’s ruling damages the sport in ways that will not soon be undone.