The Worldwide Leader In (Most) Sports

When it comes to NASCAR, there are two separate and distinct faces to ESPN.

Then there’s the other ESPN; a stick-and-ball infatuated network populated by anchormen who routinely mispronounce the names of NASCAR’s most established stars. A network that airs promos for upcoming NASCAR race broadcasts one moment, then offers wildly erroneous and irresponsible commentary on the sport just moments later.

Each week, former Washington Post sportswriters Tony Kornheiser and Michael Wilbon host a weekly exercise in hubris known as Pardon the Interruption, during which they expound, bloviate and opine on various topics from the world of sports. Their conversations are generally long on volume and short on facts, but ESPN mercifully minimizes the damage by placing a strict time limit on each topic.

Tuesday, Kornheiser teamed with substitute co-host Dan LeBatard of the Miami Herald, and among their topics was Dale Earnhardt Jr.’s recent run to the Daytona 500 pole. Their conversation proved just how far NASCAR has to go in its bid to become a true major-league sport, and just how disinterested some at ESPN are in treating the sport with even a minimal degree of respect.

Asked by LeBatard if he believed “the fix was in" during Earnhardt’s qualifying lap, Kornheiser replied, “It's a great American moment… when Dale Earnhardt Jr. can have the pole position...a guy who has not won a race in his last 93 starts. There are people in and around the NASCAR world -- not just drivers but people who cover the sport as well -- who are winking at this one; who are wondering if this wasn't a set-up because it's the pole position, not the race. This is a good set-up moment, is it not?”

LeBatard pressed him on the point, asking, “Is it a great American moment, or is it professional wrestling? If you're going to lob this accusation out there... look, I've heard the comments where people say you let something go on the car and give a guy a certain advantage. I can't deny that Junior winning would be good for NASCAR.”

“If he wins it's good for NASCAR, because he is the most popular guy out there,” crowed Kornheiser. “(NASCAR wants) to get the ratings back up. Someone I talked to who covered auto racing for a lot of years said she believed there was a 60% chance that Junior qualified with a car not quite up to code and people looked the other way.”

Kornheiser’s accusations are distasteful, to be sure. But they are far from surprising. Both he and his usual sidekick, Wilbon, have expressed disdain for NASCAR on numerous occasions in the past. They have repeatedly stated their dislike for – and disinterest in – NASCAR racing, gloating that no one at ESPN can force them to learn about, talk about, or care about NASCAR. 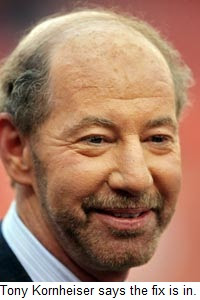 Imagine an ESPN commentator announcing on-air that he dislikes professional football, thinks it’s a silly sport and will not discuss it as part of his duties with the network. Now imagine that same commentator accusing the NFL of “fixing” the results of pre-season games in an effort to build interest in the coming season. That commentator would almost certainly need to begin polishing up his resume’.

And yet, Kornheiser continues to cash a healthy paycheck from the network that bills itself as “The Worldwide Leader In Sports.”

Kornheiser conveniently neglected to identify his mysterious NASCAR source Tuesday, which is his right. We all have sources in the sport, many of whom choose to remain anonymous for reasons of their own. That did not preclude Kornheiser from contacting someone else in the NASCAR community for comment, however. His ESPN colleague, Rusty Wallace would certainly have set him straight in no uncertain terms, had Kornheiser taken the time to ask.

Unfortunately, “Pardon The Interruption” doesn’t often deal with facts. They’re more interested in creating controversy and ruffling feathers. Kornheiser, in particular, has a frequent penchant for the offensive.

In February of last year, he served a two-week suspension after making a series of wildly inappropriate on-air comments about SportsCenter anchor Hannah Storm’s attire. “She’s got on red go-go boots and a catholic school plaid skirt,” bellowed Kornheiser at the time. "Way too short for somebody in her 40s -- or maybe early 50s -- by now. She’s got on her typically very, very tight shirt. She looks like she has sausage casing wrapping around her upper body.”

He apologized under pressure the following day, saying, "I'm a sarcastic, subversive guy. I'm a troll. That, I think, should go without saying."

On that count, at least, he was correct.

ESPN Vice President of Motorsports Rich Feinberg will take part in a previously-scheduled press conference tomorrow in Daytona International Speedway's Media Center. He, Reid, Jarrett and Petree will be on hand to hype the network’s upcoming season of NASCAR coverage. We’ll be there, as well, to ask if Kornheiser’s comments have the official stamp of approval of “The Worldwide Leader In Sports.”
Posted by Dave Moody at 11:34 PM