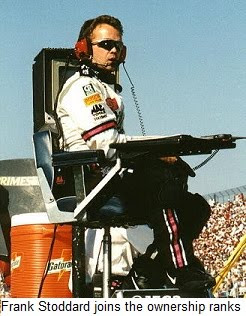 “We’ve acquired a few cars from Richard Petty Motorsports and a few from Roush-Fenway,” said Stoddard. “Doug Yates is going to build us some killer race engines, and we’re looking forward to making our debut at the Daytona 500.” Stoddard said his goals are realistic for 2011. “We’re not going to be out there knocking off Hendrick Motorsports, Joe Gibbs Racing and Roush,” he said. “Our goal will be to run between 15th and 30th, and by doing that, to give a smaller sponsor a ton of exposure.”

While major Sprint Cup teams command $20-25 million in sponsorship for a full season, Stoddard said his new operation can do the job – on a smaller scale – for as little as $3-4 million. “There’s an untapped market out there,” he said. “There are sponsors that want to be in this sport, but don’t have that $20 million to spend. We’re going to reach out to those companies and give them a chance to be involved.”

Stoddard and Reath first joined forces nearly a quarter-century ago -- in 1988 -- when U.S. Chrome backed New Hampshire driver Dana Patten in five races on what is now the Sprint Cup Series. Stoddard served as crewchief and chassis specialist for the team, and more recently teamed with Reath to field cars for Boris Said in a limited schedule of events on the 2009 NASCAR Sprint Cup Series. Last year, he served as crewchief for the #26 Latitude 43 Motorsports team, an operation that is not expected to compete this season.

“I am energized to be back partnering with U.S. Chrome and Bob Reath… this time as co-owners on NASCAR’s grandest stage.” Stoddard said. “With U.S. Chrome’s sponsorship of the FAS Lane Racing Team, we look forward to hitting the ground running at the Daytona 500.”

Stoddard has had success at Daytona in the past. He teamed with Scott Wimmer to finish third in the 2004 Daytona 500; still the best rookie finish in the history of the event. He has 14 career wins and 90 Top-10 finishes in Cup competition, many of them with driver Jeff Burton during their time together at Roush Racing.

“At U.S. Chrome, we have two passions,” said Reath, “developing superior-performing, environmentally-friendly coatings – and racing. We are excited to renew our partnership with Frank Stoddard and to re-enter NASCAR in the biggest way possible – by challenging the world’s best at the Daytona 500.”

The team will announce its Daytona 500 driver early next week, with Stoddard hinting he may utilize multiple wheelmen over the course of the season.
Posted by Dave Moody at 6:41 PM