Wallace To Sub For Kenseth At Daytona 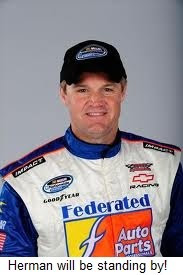 Kenny Wallace told Sirius NASCAR Radio’s Sirius Speedway with Dave Moody that he will be standing by to take over Matt Kenseth’s Crown Royal Ford, if Kenseth is called away during SpeedWeek 2011.

“I got a call last night from (Roush Fenway Racing GM) Robbie Reiser, and he said Katie Kenseth is due to give birth to their second baby in a couple of weeks," said Wallace. "They want me to be on standby in case she goes into labor before the Bud Shootout or Gatorade Duel. He said Matt will run the Daytona 500 no matter what, but they want me there in case they need me earlier in the week.

"Even though it’s probably because I’m the same size as Matt and will fit into the seat easily, it took me about a quarter of a second to agree.”
Posted by Dave Moody at 5:41 PM