Sirius NASCAR Radio’s Sirius Speedway with Dave Moody will present a special look at the state of sponsorship in NASCAR on Friday, February 4.

Guests will include Hendrick Motorsports Vice President of Marketing Pat Perkins, who will outline the sponsor procurement process at one of NASCAR’s largest and most successful teams, while Linkous Enterprises President Ron Linkous speaks on the challenges smaller teams face in attracting and keeping sponsors. 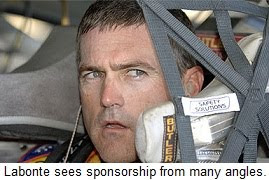 Former NASCAR Sprint Cup Series champion Bobby Labonte – who owns his own short-track race team, as well as one of the sport’s most successful marketing companies – will provide his unique perspective, as will RainEater, LLC President Lance Thornton, whose company is set to enter the sport as a sponsor in 2011.

“It’s no secret that the economy is still suffering,” said Sirius Speedway host Dave Moody. “We hear anecdotal reports that things may be beginning to turn around, but we thought it would be good to talk to the people on the front lines. I look forward to giving fans and industry insiders alike a look at the state of sponsorship in our sport.”