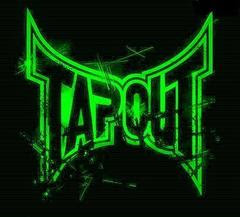 Elliott Sadler told Sirius NASCAR Radio's Sirius Speedway with Dave Moody that he will have a new sponsor in a limited number of NASCAR Nationwide Series races this season.

“KHI announced today that the Mixed Martial Arts apparel brand `TapouT' will be on our vehicles for a couple of races this year," said Sadler. "They’ll start out on my car at the Las Vegas Nationwide race, and they’ll be on Harvick’s machines a time or two, as well. The Trucks look bad to the bone.”

KHI co-owner Kevin Harvick will also carry the black and white TapouT logo on the hood of his #2 2 Chevrolet Silverado in the Camping World Truck Series race at Michigan International Speedway in 2011.

Harvick, an MMA fan, said he is looking forward to helping TapouT expand into the NASCAR market. “TapouT has become one of the most well known brands in sports,” he said. “To have the opportunity to become part of the TapouT organization means a lot to not only me, but the KHI racing family. DeLana and I are very excited about this program and look forward to kicking it off in Las Vegas.”
Posted by Dave Moody at 4:57 PM